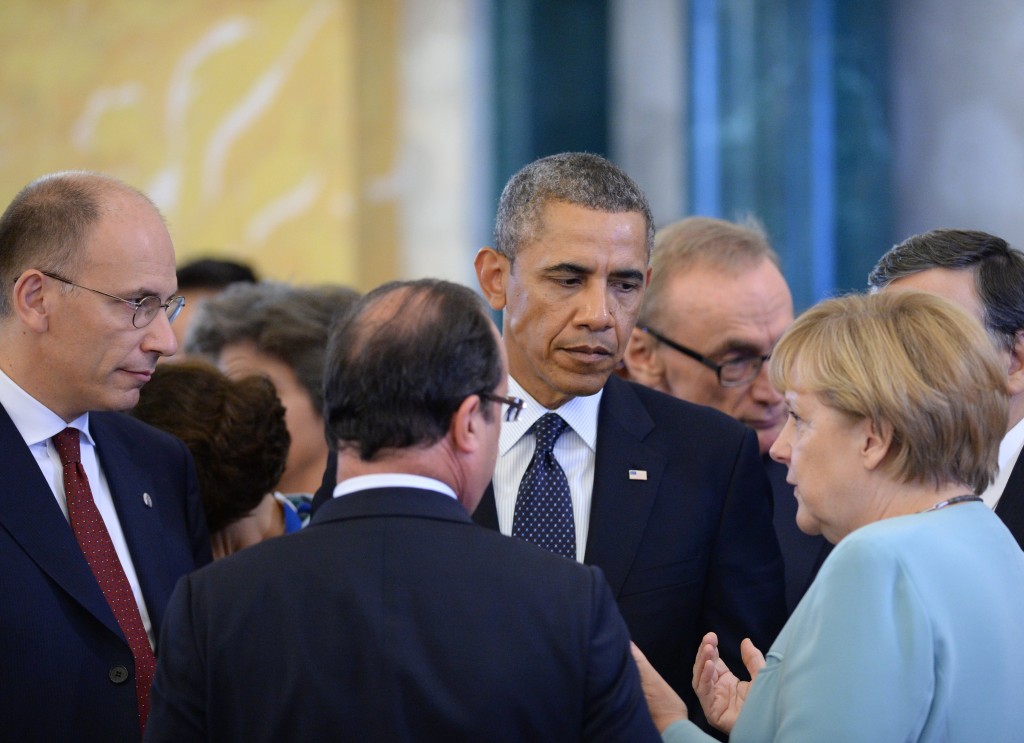 Obama is defending Goldman Sachs & of NY Bankers in their bid to include Derivatives in the free trade agreement with Europe and to ensure they cannot be regulated by Europe. Obama insists, at the bank’s request, that to subject US banks to EU regulation will complicate the regulatory landscape unnecessarily. The banks are lobbying hard for that position from the White House. Obama wants derivatives IN EVERY MARKET globally to be exempt from foreign regulators just in time for the next bubble. Obama argues they are hedges against exchange rate fluctuations, but derivatives also bet on purchases of real estate and mortgages, commodities, food, their sales or purchases in the future. This includes the toxic bombs that wiped out so many banks – mortgage derivatives, including the so-called CDO’s (mortgage insurance).

The EU is now putting pressure on the US by threatening to exclude any discussions on financial services altogether from the trade agreement unless Washington agrees to Brussels’ demands to put regulation on the table. The EU is arguing that the existing transatlantic dialogue between watchdog regulators and other international venues is not entirely adequate for regulatory matters. Indeed, the US has far too many regulators compared to just one in Europe including London. The mortgaged backed securities required approval by SEC, CFTC, Fed, Banking regulators, etc. at least 7 approvals of US regulators but they all follow each other anyhow. Huge waste of resources. The EU is correct on this debate.

Derivatives created by the NY banks are an important part of the target with the US free trade agreement. The EU has for a second time granted an extension of the deadline due to efforts to oversee the global derivatives market. The U.S. regulators have completely failed to achieve any breakthrough in the main points of contention. This was reported by Business Insider.

Nonetheless, this move could have tremendous consequences for the financial industry on both sides of the Atlantic. It was Robert Rubin who sought to gain the exclusion of regulation for banks under the WTO to export derivatives. However, the derivative nightmare is still fresh in Europe where it created the most damage. These negotiations could see banks and insurers left out of what would be the biggest regional trade agreement in the world, covering almost half of global output.

The two sides were at a standstill over the design of clearing houses to secure such trades. Creating independent clearing houses to help in the future to avoid risks while operating together in the respective legal systems is essential. Creating such a system is not enticing because these toxic-bombs can be so explosive nobody fully can determine the risk.There are obviously deep concerns about the impending losses, whereas a further delay would mean a setback for the intended regulation of the face value 710 trillion US-dollar derivatives market.

Nevertheless, it has been the complexity of the derivatives market which is considered as the core problem of the financial crisis 2007-2008. The controversy between Obama and the EU is his relentless protection of the NY banks. As the European banking crisis gets far worse, the previous optimism where Obama just expected “trust” in America but that is fading in finance rather rapidly along with the NSA global scandal. Obama expect just “trust” without verification. The greatest problem has been that neither the heads of the banks nor anyone in Washington fully understand what happens in a such a market during a meltdown do to the deep complexity of these structures. We are not simply dealing with a single commodity for a future delivery. These are real overlays often involving several layers with counter-party risk that nobody can assess.

Obama has subjected the entire world to US regulation prosecuting foreign banks that do not obey US sanctions, but at the same time he is trying to prevent any European regulation of US banks. The US banks are lobbying Obama to make sure they are excluded from any European regulations. Furthermore, the US regulator CFTC demands that the European clearing houses must comply with their regulations when foreign entities operate in America and not rely on rules of their home regulator. The US wants to exclude NY banks from European regulation when operating in Europe. So these are one-side demands of extreme arrogance.

Come December 15th, 2014, some resolution must be reached or EU banks must cooperate with US regulators. In return, the current stalemate puts pressure on the US banks to have significantly higher capital buffers for deals by US firms ready and in place to conduct business only through clearing houses in those countries that are recognized by Europe.

The NY banks still rule the courts and the White House. They demand to be excluded from any European regulation while selling their product in Europe. Such a requirement would be a huge mistake if they win. The next meltdown may lead to war.

« An 18 Year-Old From Scotland Comments:
Pension Funds Being Taken TO Fund Infrastructure »