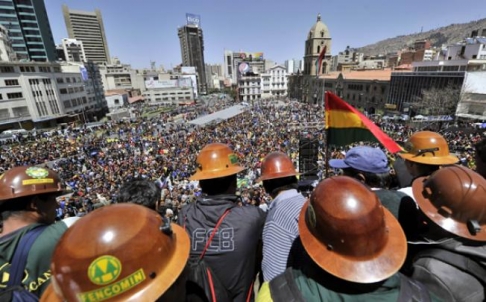 Anyone who question that there are two trends converging, civil unrest and international war, had better open their eyes. Bolivian police clashed with groups of independent miners in Cochabamba in central Bolivia on Monday during a protest against a new mining law. The miners protested in 2012 in force. There have been rising protests since 2010 and they seem to be building.

Police were forced to take cover as the angry miners hurled sticks of dynamite at them from the surrounding hills and blocked roads. The cooperative miners are angry over a new law passed at the weekend, which prohibits independent miners from working with their private counterparts to mine the country’s natural resources. It also states that any contracts to mine sites must first be approved by the legislature.

The 100-thousand independent miners in Bolivia are traditionally political allies of President Evo Morales and are exempt from some taxes. This preferential treatment has upset miners from the private sector.