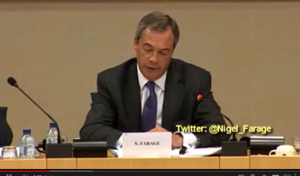 Nigel Farage is spot on. This was forwarded to us today. It was his recap of the truth about the Euro. This is very much part of the dollar rally. There becomes little choice. Some have asked:

The Dow is being forced higher as capital has little choice. Then there is the shift from public to private. Europe will generally rise with the declining Euro just as the Nikkei. That is a different aspect. Everything has an international value. Thus, the shares will try to stay even in those terms meanings they will rise with the decline in the Euro. The bear market we are running our models on. In a preliminary view, we may be looking at an explosive rally into 2015.75.

Listen to Nigel. He is one of the FEW in government who has a head on his shoulders.