I wanted to comment on your article, but WordPress will not let me log in, so I thought I’d write an email.

I respectfully disagree with your ideas in this article. Come live in Southern California. These people are coming for the free $$$$: Food, housing, SNAP, WIC, etc., etc., etc. They are NOT big on education and create havoc for our school systems. We are stooping to the lowest common denominator. How can you not see this?

Also, I respectfully disagree with your comparison to prior immigrants. Please note that those were LEGAL immigrants, coming from first-world societies, and these immigrants shared our ideas. I can assure you that is not the case with immigrants from Mexico, Central and South America.

Yes, they are hard-working, but they expect the government to provide. This is totally destructive to our economy. I just do not see how you can ignore these differences and gloss over them as if they are the same as the Italians, Irish, et al. The immigrants from south of the border are much more gimme than these other people EVER were. Perhaps you need to live here to see it. And I love them as a people: They love their families, they are kind and loving and sweet. Perhaps by the third or fourth generation they will exit the gimme crowd, but I still think they will drift left, to socialist values, as that is their heritage.

Thank you for your writings and analyses. Though I may not always agree with you, many times you have illuminated a subject so that I more clearly understand it. In this case, you do miss the boat. 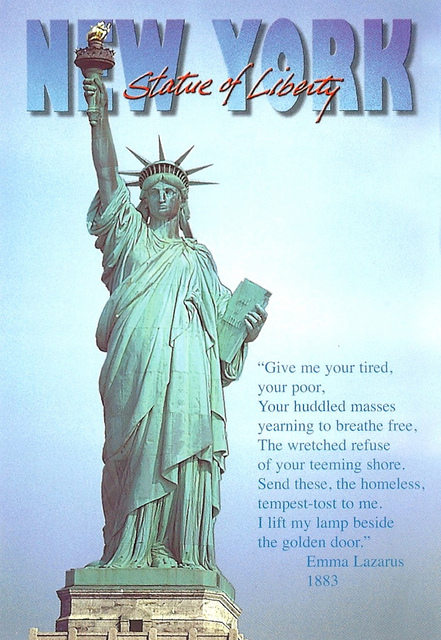 REPLY: What you are saying is correct. The point I am making is they see this as opportunity for them. They are not fleeing taxation in Mexico. There were no laws preventing the immigration during the 19th century. The comparison is only the MOTIVATION being OPPORTUNITY rather than fleeing for taxes.

There is a difference socially between those who came BEFORE the New Deal and after. There were no grand government programs previously. True, the welfare state today can provide the added incentive to come, but this is still in the category of OPPORTUNITY. As the economy in Europe has turned down from 2007, we are getting a glimpse of what will hit the USA in mass after 2015.75.

In Europe, the Spanish are Migrating to Germany for Welfare. This is the toxic side of Marxism. We see the same heated debate raging now in Europe. Restrictions on people from Bulgaria and Romania freely moving into Europe ended on January 1st, 2014. This has triggered a fierce debate about the aim and purpose of the European Union for the very same reasons. People are there for the OPPORTUNITY and transferring the benefits back home. This new era of Marxism has changed a lot and has increased the influx. The idea that the EU would create the same American melting pot has utterly failed because they did not understand that there has to be a common language for that to take place. The idea was set forth in the official EU guide_to free_movement.

I often point out that BEFORE the New Deal, what made America work was DISCRIMINATION. Of course people immediately assume I am being racist. The truth is quite different. Whoever was the LAST off the boat was ALWAYS discriminated against. That was actually good, because ABSENT the social programs, what took place was to find a decent paying job it forced whatever group to speak English. Today, ask a white American what they are and they will respond half German, Irish, Italian, French, or whatever. They do not say American unless outside the USA. This is the melting pot for in Europe you do not see Irish and Italians marrying as a general common trend as you do in the USA.

The difference in the OPPORTUNITY that we do see looking closely pre-New Deal and post-New Deal is the absence of the drive to speak English. The melting pot is gone and what we are getting is a division between English and Spanish. This is not good long-term and will fuel only social unrest between the two communities when the economy turns down very hard.