Married to an Idea – The Dow & Elliot Wave

In trading, the first primary rule is: Do not marry the trade! This is what destroyed Japan. Because of the accounting rules Japanese investors did not have to report a loss until they took it. That rule (not marked to market) led to the Japanese holding losing positions until they cried blood from their eye sockets. The failure to sell extended the correction into a 26 year depression. The Great Depression in the USA saw the 90% drop in just a 3 year period. This is why TIME is significantly different between USA and Japan and that will dictate the different outcome.

This is the type of email I typically get from people who are married to the idea that the Dow must fall 90% because that is what took place during the Great Depression.

The Nikkei is well on its way to a 90% drop, so I can’t see any reason why the US indicies won’t do the same thing.  It looks just 1 more giant bubble based on out of control credit creation and leverage to me.” 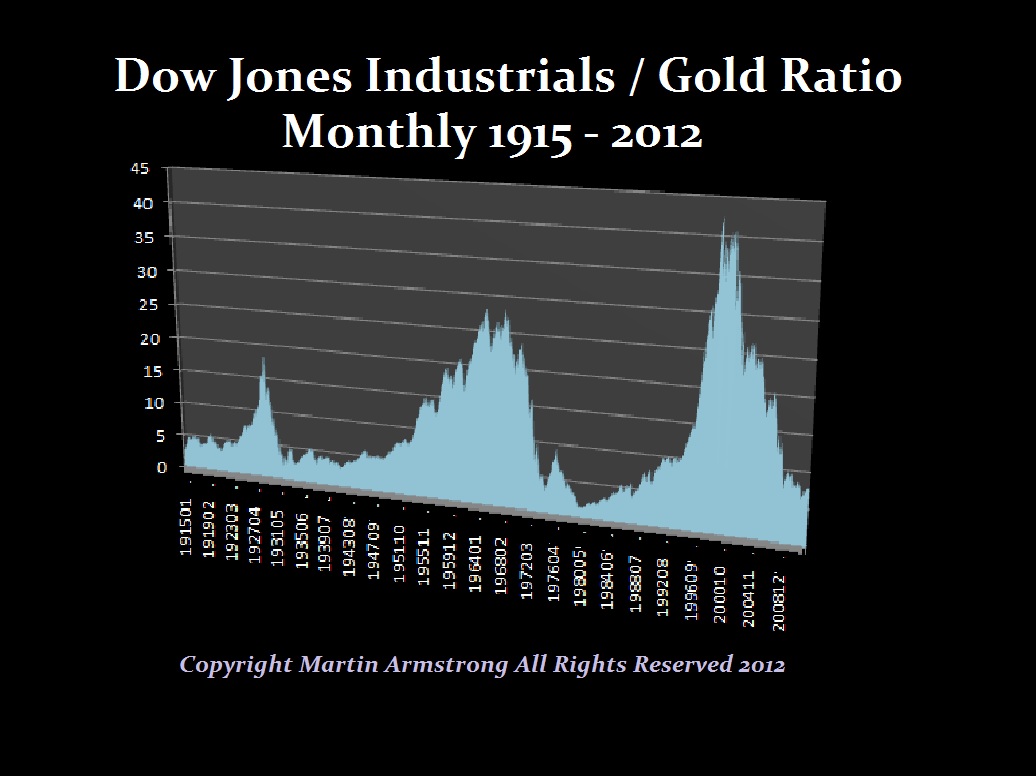 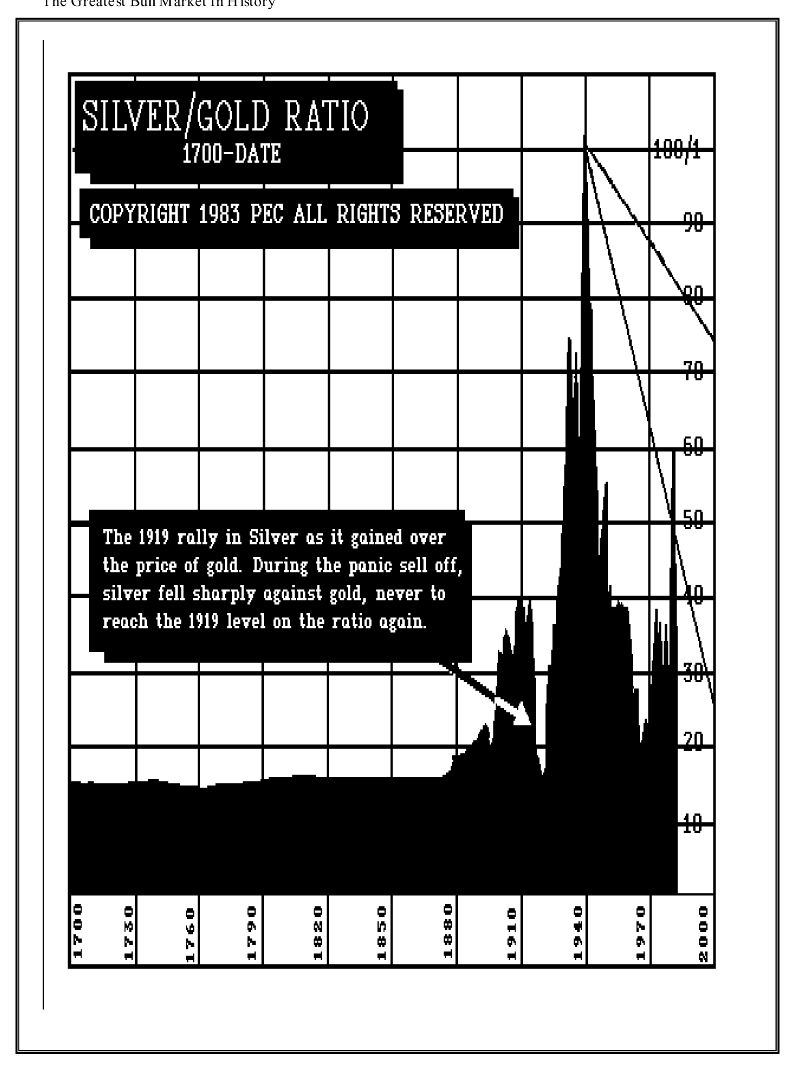 It is nice to just presume the Financial Crisis we face must be resolved by a collapse in the share market. They then typically blend that with gold going to $30,000 dividing the debt by the official gold reserves as if this is some mandatory formulae. They also tout the Silver/Gold ratio as well as the Dow/Gold ratio. They pick extreme points and portray that is somehow the norm yet it has been at such levels briefly of arbitrarily because of some political fixing that ultimately failed. You might as well say the Nikkei should be 40,000 because it was there for one brief shining moment in December 1989.

Just how does this miracle of a 90% drop in the Dow with $30,000 gold unfold? This is just beyond me. I am a history buff. I correlate everything globally. I simply cannot find a single incident in history where such a scenario EVER played out. Those who always see the Dow at 1,000 and gold at $100 are creating unrealistic scenarios that are even more bizarre. They have said the same thing every time there has been any decline like a broken record. Just as the hyperinflationists who assume the Dow will drop by 90% and gold will soar to $30,000, the 1000/$100 crowd are also speaking gibberish. To create the first scenario is impossible for under hyperinflation ALL assets rise – including real estate. Under the second scenario, for the Dow to go to 1,000 and gold to $100, that is only possible if the dollar displaces ALL currency in the world. How does that happen in a Sovereign Debt Crisis? 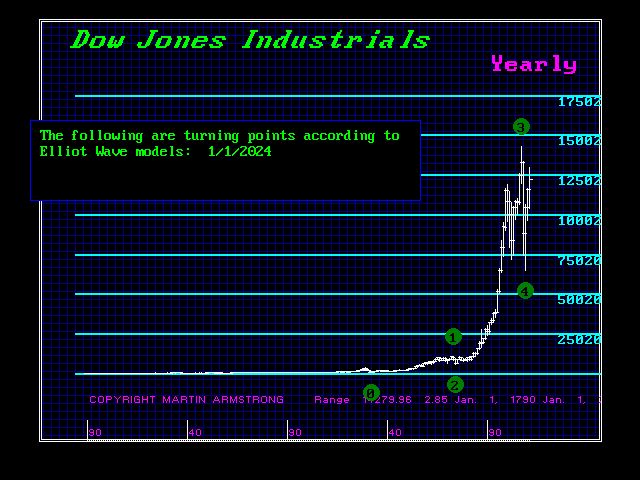 Apparently a number of people in the Elliot Wave camp have been using our chart that reconstructed the Dow back to 1789. There is a debate there where some say it will rise and others say it will crash by 90%. Here is our computer doing Elliot Wave from the 1932 low where the “count” and projection points to the final high do not show a 5th Wave Conclusion and projects that out into 2024. So sorry, even using the subjective Elliot Wave based pattern recognition still disagrees with any scenario of a 90% drop.

So NEVER get married to a trade. If you do – you will NEVER be a trader. A fool is quickly separated from his money. That ALWAYS happens when you are married to a trade. The best of the best remains fluid at all times buying or selling based upon the unbiased trend. You must always go with the flow. This is why I constantly tell people that the object of the computer models is to replace me. The danger in forecasting is always personal opinion. Computers do not get emotional. They do not only say buy. If you never say sell, then you are just like the Japanese – married to an idea and refuse to ever consider a change in trend.

I am not selling stock. I have no incentive to be on one side or the other. When I was first going to open an office in Europe I met with the head of a Swiss bank in Geneva and ran a few European names by him for his opinion. He asked me to name one European analyst. I couldn’t. I was embarrassed. He said to me don’t be. The reason everyone was using Princeton Economics was because I could care less if the dollar went up or down where European analysts would never say sell for it would have been like being a traitor.

The Reversal System is pure numbers. The numbers are the numbers. It does not depend upon my opinion. The same is true of the forecasting arrays. The object is not to be some guru claiming to be always right. Nobody can do that consistently. We have hot and cold streaks. The only way to look at the future is in an UNBIASED manner. It is what it is. It will never be some tool to seek retribution upon society. The object is to survive. If you are obsessed with evening the score and just want to see everyone suffer, sorry, you will reap what you sow. The future is bad enough. Look well after your own survival and let others suffer whatever fate that comes their way.