QUESTION: Why is mainstream media pro-Obama and war? 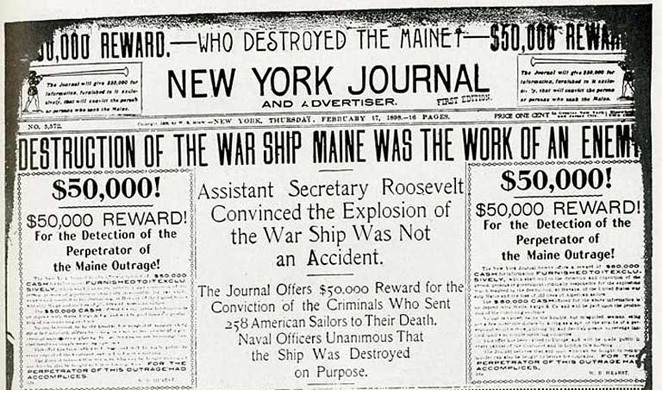 ANSWER: The press has traditionally been a pawn of government. Look at the NSA scandal how they have taken control of airlines, Google, Facebook, Yahoo, and Microsoft to name a few. The American press was responsible for creating the Spanish-American War in 1898. I was taught that in high school.

On Aug 2, 1914 – The German press falsely reported that French bombed Nuremberg. That was to get the German people thinking they were being attacked to win their support for invading Europe.

The press has been anything but free and honest and has far too often played a major role in creating wars and covering up political prosecutions such as the famous spy trial of the Rosenbergs in NYC.  Even the plea entered by Michael Milken was interesting. They charged his brother and then threatened to indict his grandfather in his 90s unless he took a plea because they could not prove their case at trial. The London Financial Times reported the threats against his family, but not the New York press.

This in my OPINION why Obama wanted the kill switch on the internet. Government needs to control the news. That is what they do. They need it for political prosecutions as well as for wars as we are observing right now. Anyone who exposes the illegal activity of government is criminally prosecuted and tortured mentally for life. Anyone who thinks government “feels your pain” it is because they enjoy that – it is called power. Why does the NSA feel that have to bug the European Parliament, the United Nations, Facebook, and render every computer covertly accessible from their control room? This is not terrorism they are worried about. This is people rising up against government when all the promises collapse to dust – i.e. Bail-Ins. Power corrupts – absolute power corrupts absolutely.

FREEDOM of the PRESS is the cornerstone to LIBERTY, which cannot exist without it. What the NSA has done is to undermine everything so many generations have fought and died for to establish a free society. As Franklin says, those that advocate giving up our fundamental liberty to gain security as promised by Obama, deserve neither liberty nor safety. Will society ever learn? It does not seem likely. Whenever a newspaper or organization refuses to print the truth, it betrays the people and everything that made us a free society. They are the ultimate traitors – not Snowden, Manning, or Wiki Leaks.