Perhaps the most perplexing aspect of the current equity trend that is not well understood has been the development of private investment by governments. Strangely enough, the development of the euro has totally disrupted the world monetary system for this has created a period of dramatic capital concentration in US dollar debt as the real only reserve currency in the world.

With returns on government bonds at historical rock-bottom prices, sovereign wealth funds are emerging as part of the trend that shifts confidence and capital from the Public to the Private sector fulfilling the ECM. Consequently, we see both sovereign wealth funds as well as central bank reserves moving into the stock market markets and other higher-yielding assets like real estate at a rate that private investors have not even contemplated. The traditional talking-heads are completely lost ranting on and on about bubbles yet they cannot grasp that the retail speculative element is not yet in the marketplace.

Clearly, ever since central banks cut interest rates to record lows to perhaps at first support the banks creating the greatest spread between bid and ask with respect to money (deposits & borrowing) in a stupid attempt to shore up flagging economic growth in the wake of 2007, world governments have also spiraled downward into debt creating the incentive to keep interest rates low to reduce their own funding of national debts. After all, about 70% of the historical debts is accumulative interest – not even the idea of socialism helping society.

Nevertheless, the divergence between the United States and the rest of the world economically is reflecting the stark difference in the abuse of socialism that dominated Europe postwar where even Margaret Thatcher sought to “privatize” so much of the British economy that had been state-owned in a hybrid-Marxist state where major industries were state-owned as in Communism. The lower economic growth and higher taxes of Europe prevented it from emerging as a truly competitive economic entity with the United States. This only led to people attributing this handicap to the fact that the USA had a single currency rather than lower tax rates. The Euro would therefore reverse the slower growth without tax reform. The idea failed to ignite the European economy and has backfired as now France is starting to emerge as Europe’s greatest threat – an economy that is beyond bankrupt that has set in motion a tremendous capital flight driving domestic capital into Germany and international capital out of Europe as a whole.

The capital flows are in themselves being altered as government capital itself has been forced to look further afield to grow public pension money and to maintain some diversification in central bank currency reserves as the euro has reduced the number of currencies that can be used for diversification. The resulting tide of money flows is becoming starkly different as governments themselves are being forced into private investment that is interestingly creating a danger of distorting stock markets to escape the narrowing opportunities to achieve diversification in currencies and the collapse in interest rates that defeats pension funds as a whole. These two converging trends are causing prices to reflect political priorities rather than traditional financial reality.

The typical analyst keeps calling for a crash and bubble that are threatening to inflate the entire economy that on the other hand we have central bank teams working so hard to prevent when they themselves are a new instigator. The talking heads are left talking to themselves as they keep calling for a crash based solely upon price levels on a chart that are disconnected from the underlying trend. There is no speculative bubble when simultaneously recent data from the Federal Reserve illustrates that American individuals currently have the lowest level of stock ownership in 18 years. The socialists proclaiming see the rich are becoming richer for this proves there is a widening gap between the wealthy and the rest of America. They purport that the recovery can largely be explained in one word: stocks – not economic growth for the average person. They then use this to argue for higher taxes to punish the “rich” while ignoring the crisis caused by the high taxes in Europe and the collapse in socialist theories. 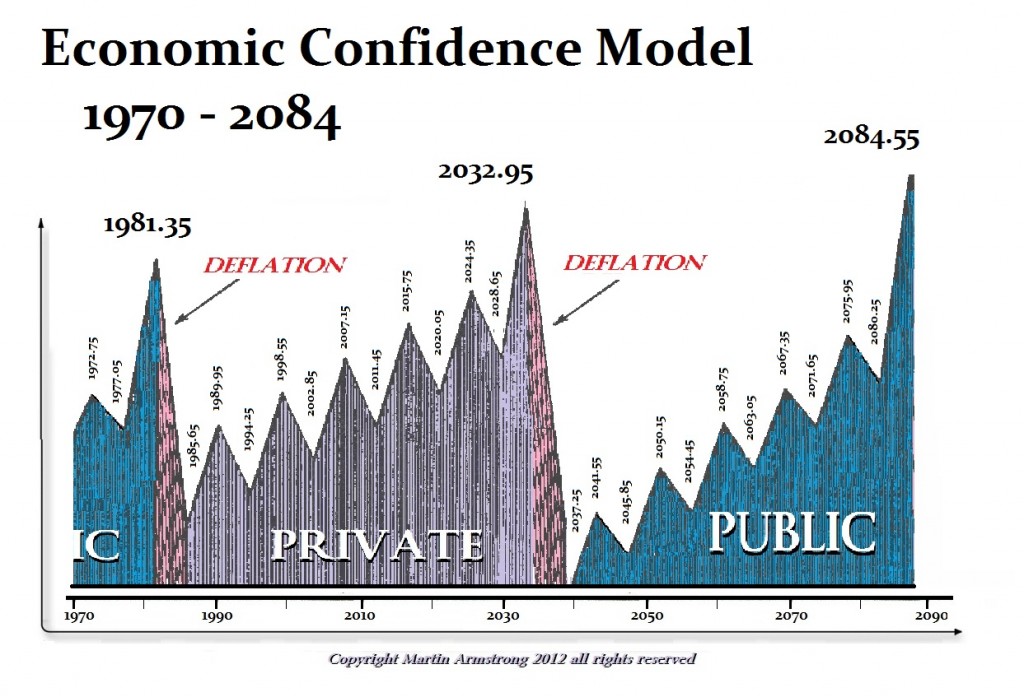 Others argue that there is both an actual and a potential conflict of interest with government becoming a driving force in private investment. This is oddly the price of socialistic policies whereby instead of owning and managing companies as Margaret Thatcher reversed, now governments are simply investing in the private sector to earn income to try to (1) diversify and (2) earn income needed for pension they promised.

Sovereign investors are now managing assets worth $29.1 trillion that has reached 40% of the total global economy. This perplexing trend has now been created by 157 central banks, 156 public pension funds and 87 sovereign wealth funds. The emergence of government as a large player within the private sector is becoming the ultimate irony of socialism.

The world’s biggest sovereign wealth fund belong to little Norway thanks to its oil reserves. Norway’s $890 billion fund owns 1.3% of all global shares and aims to put more of its cash in private assets such as equities, infrastructure and real estate steering away from bonds. Alternatively sovereign wealth funds can reflect an accumulation of manufacturing export revenues, as is the case with China. where the China Investment Corporation (CIC), now has $575 billion in assets, which has allocated about 32% into public equities and such things as private equity, real estate and infrastructure. Then there is the pension fund side as in Australia, where there is the Superannuation fund that by law employers must pay into and now assets have totaled $1.85 trillion at the end of the June 2014 quarter.

Sovereign investors are now prominently featured on the shareholder registers of many of the world’s largest companies. Take Qatar, who has invested nearly 5% in Barclays, and over €2 billion in Deutsche Bank/ These are a legacy of funds participating in shoring up beleaguered banks since the 2008-2009 financial crisis that are similar to the Japanese Postal Savings fund that saw its assets squandered trying to support the Japanese economy for political reasons.

It appears that the analytical community has not thought this major shift in trend through. There are profound subtle changes underlying the global economy that has introduced potential serious consequences for such major inflows altering the traditional fundamental analysis relied up by the majority of private investors. Most analysts have not even considered the developments in capital investment flows instigated by these vehicles.

True, sovereign wealth funds introduce a potential for distortions created by state-backed funds’ involvement in markets that no level of strict internal guidelines can mitigate because in a crisis, these funds can be transformed into political tools, as we saw with the Japanese Postal Savings Fund that once had more than $1 trillion in real assets back in 1989. We must take these risks into consideration for political manipulation will take place in a crisis.

When Qatar Holding cut a stake in London Stock Exchange by a third, analysts suddenly took notice. The demand for the shares rose as some saw this boosted liquidity as investors no longer feared the presence of just one major big institutional investor. But this view was incorrect for the rise that took place was not unique to London. Nevertheless, with the shift to private investment expanding, this reservoir of nearly $30 trillion could really alter the normal expected behavior of markets. Keep in mind that the MSCI All Country Index has a market cap of about $38 trillion.

Obviously, state-backed investment is accelerating rapidly. Sovereign funds spent $24.5 billion on just mergers and acquisitions during the first half of 2014. Ironically, we need this shift from public to private to create employment and state governments contract.  Yet, both the credit and capital flows are being politicized and therein lies the real risk after 2015.75. It’s a disturbing trend and will lead to what appears that cycle inversion process as politics enters the market moving contrary to normal investor reactions.