The Obama Budget is no more honest than Madoff’s track record. If Madoff deserved jail for life – what do our politicians deserve? Here is Obama’s budget. He wants to destroy the economy raising taxes on everything and bring down the iron curtain so not one penny can leave. He wants it all like Maximinus I. If you give your daughter your credit card to buy a prom dress and she spent $5,000, and you go nuts, her reply that she saved you $5,000 because she really wanted the $10,000 dress means she should run for politics. Groom her well, for she has the making of a President.

Obama’s claims of cutting the deficit are the same thing. He makes outrageous assumptions, then pats himself on the back for a fine job in cutting nothing but hot air. 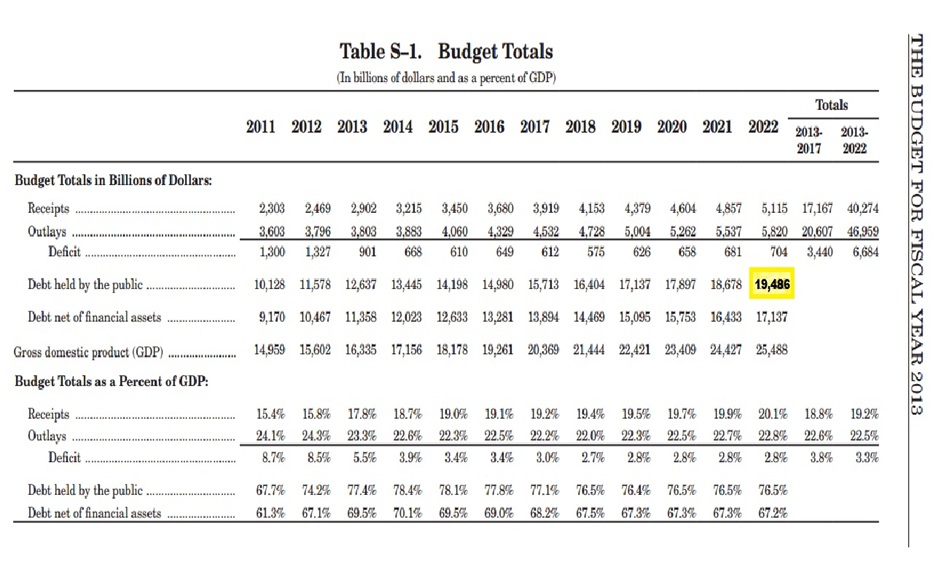 Look closely at the projections for economic growth. In his budget he had ASSUMED a steady economic growth each year of 5%. That is not even taking the trend in motion and assuming it will stay in motion. This is devastating and shows that government is secretly so desperate for money, they will destroy every right, privilege, and immunity to stay in power. Both sides are doing it. Both sides will rally to the cause of eliminating guns among lawful citizens to try to prevent a revolution as things collapse around them.

We have not seen annual economic growth above 5% in this century.The deficits will be far greater than expected and so there will be the most aggressive tax collection in history. This is why they are handing all your private info to the FBI and CIA to hunt not terrorist – but your assets. That will produce a further economic decline as more and more people just start to hoard and not invest helping interest rates to rise. This is the backdrop to our forecast for STAGFLATION whereby there will be a rise in prices caused by rising taxes driving up the cost of everything, but a continued contraction in economic growth will accompany hoarding and increased aggressive tax collection. The only way to see GDP grow faster than 5% would be reflecting a depreciated currency in nominal terms.

There is no possible way this will end nicely. The attack upon any American doing business outside the USA is causing a collapse in world trade. Americans are being thrown out of everywhere because if a foreign institution does not report what an American is doing overseas, their assets will be confiscated in the USA. That is nuts and now nobody will deal with an American. Obama smiles big now as he looks to confiscate wealth on a massive scale. Nobody asks what next. If you destroy everything, confiscate all assets, jail everyone you can claiming they hid something, what do you do when the debt is still there year after year?

There is no end game here. This is the path to revolution, chaos, and massive civil unrest. It does not have to be this way if just for once we looked at history for a guide. Of we will not do that. Collectively, we meet the definition of insanity – we repeat the constant mistakes of the past over and over again, and actually expect a different result. Amazingly STUPID!