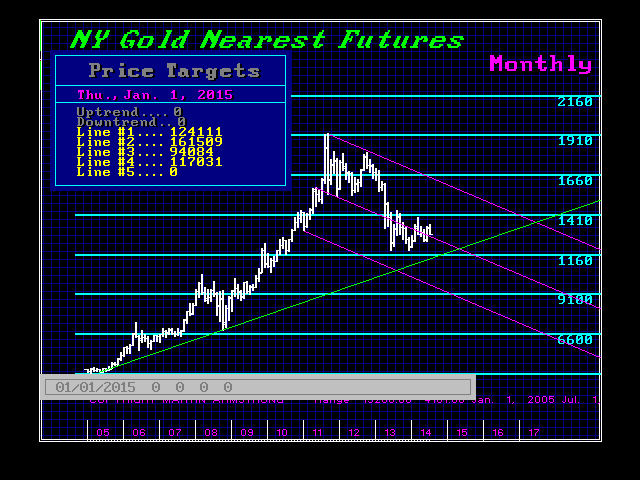 The closings for July were quite important in the long-run.Gold on a nearest futures basis closed July at 1281.30. Support during August will lie at the 1240.00  and resistance will form at 1285.00 on a closing basis with 1318.00 followed by 1350.00. We do not see a possible final low before Jan/Feb 2015. The uptrend line is about where the last lows were. This is typical and most standard chartists will see that break as bearish long-term. We need to break that support to see the towel thrown in by most. So we are still looking for a low under $1,000 and that could form as early as Jan/Feb. We will lay out the details going into September 2015 in the coming report. 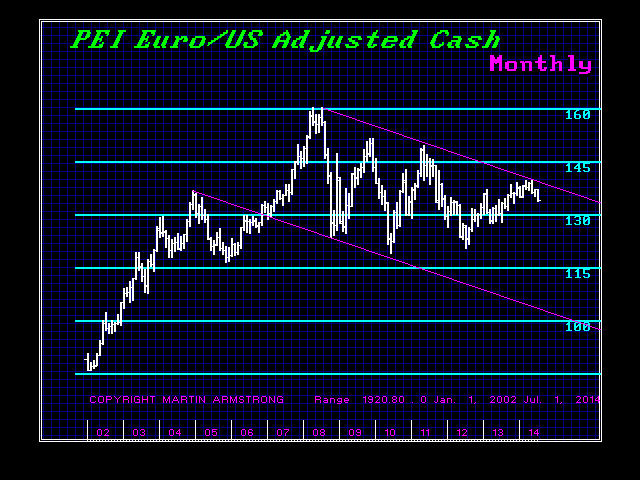 The Euro pulled off an outside reversal to the downside (exceeded the June high and closing below the low). The cash closing was 13388 and we elected the first minor Monthly Bearish Reversal leaving us 132-1333 to watch very carefully. We are still looking now for the September turning point. Here the chart pattern is awesome. The Break-Line Channel has performed perfectly capturing the rally and we can see the Euro has been unable to breach that resistance. On the downside, we should be expecting a drop to par in the months ahead. 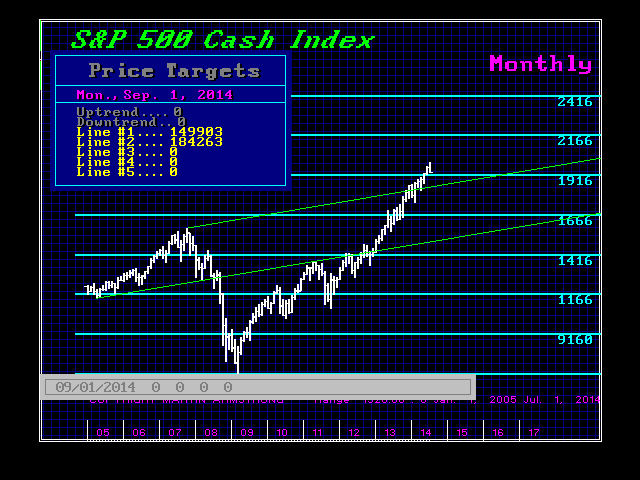 Looking at the S&P 500 Cash, we have broken out about the Breakout Channel. The key now is for that channel to provide support for any retest. By September, that will reside at 184263. A correction can be 2 to 3 time intervals and that would bring us to where the computer is targeting – October. We will also see volatility tick up Oct/Nov. There is a potential to extend the decline into December. If that were to be the case still holding the top of this channel, then this would warn of a possible extension in the cycle pushing the high off to 2017 based upon Sovereign Debt Crisis and perhaps war that pushes capital into stocks running away from debt.

The pattern is different and more bearish in the Dow compared to the S&P 500. Here July was an outside reversal to the downside (new July high closing below June low). The first Minor Monthly Bearish lies at 1528400. We need to watch this number for if elected, then this could signal not just an October low, but an extension into December. 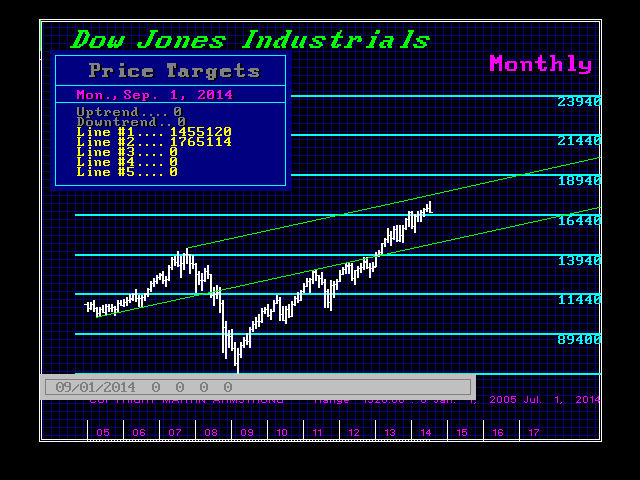 Now compare the S&P500 to the Dow Jones Industrials. The former is the broader market and the latter is the big money institutions. The Dow lead the way up and then we warned the shift to the S&P 500 was taking place. You can see the stark difference. Constructing the same channel from the same points in time, the Dow has not yet broken out of the top. Any retest here should hold the bottom of this channel. How these two indices react in the next 3 months will be critical to the future. In the Dow, we may see a turning point in August. We still show October and December, But here we are showing August as important. So pay attention to the Weekly Reversals and arrays in the computer reports.

« The Euro – A Dying Currency
The Bureaucracy is Out of Control »