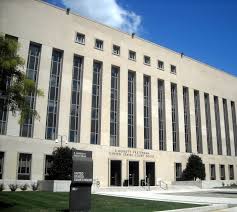 Judge, Richard J. Leon of the Federal District Court for the District of Columbia, has ordered that the NSA collecting data on all phone calls is illegal violating the Fourth Amendment. Judge Leon was appointed to the bench in 2002 by President George W. Bush. He has stayed his injunction “in light of the significant national security interests at stake in this case and the novelty of the constitutional issues,” allowing the government time to appeal it, which he said could take at least six months, but this is something that is also likely to end up in the Supreme Court.

It is difficult to say where the Court of Appeals will land on this issue since extreme Republicans and crazy Democrats are in favor of spying on everyone. Being a terrorist today is anyone who disagrees with the government.

In my own case, the CFTC denied the company the right to hire a lawyer and then illegally argued they could seize everything because I did not answer on behalf of the company. I let them argue how they could just steal everything and then I stood before Judge Richard Owen and revealed that I too understand law and stated bluntly that the Supreme Court ruled that corporations could NOT BE represented pro se (by themselves) and had to hire lawyers. The CFTC knew the law, but being slick, assumed I did not and tried to illegal seize everything they could get their hand on. In Osborn v. President, Directors & Co. of the Bank of the United States  22 U.S. 738 (1824), in dictum, Chief Justice Marshall stated, “It is admitted, that a corporation can only appear by attorney.” So this is nothing new but has been the law since 1824. They know what they were arguing demonstrating these people will violate the Constitution every chance they get.

When I informed the court I was not ignorant of the law and that I was not legally permitted to answer, Judge Owen went nuts because he had no choice but to rule in my favor. The CFTC was acting illegal. However, this was probably the first time Judge Owen was forced to rule against the government ever since his appointment to the bench by Richard Nixon. He blurted out – you are a “legal terrorist”, simply because I had to win. So a terrorist today is simply anyone who disagrees with government or blocks them from acting entirely arbitrarily. Like money laundering that was enacted for drug dealers, today it has been expanded to hiding money from the government preventing them from getting their hands on it for taxes. Keeping cash in a safe deposit box is now illegal and money laundering.

What the NSA has done is highly unconstitutional. The entire system demonstrates that we do NOT live in a free society because they have inverted the obligations under the law. Congress can pass a law and actually decree that like the good old days, every girl must sleep the night before her wedding with a member of Congress to ensure of course she is pure. The English tradition was called “Prima Noctum” and was used in Scotland by the English and was also used by English lords, dukes and earls who claimed the right. They could argue this was part of the common law and therefore they have the same right today since it was not expressly forbidden. There is nothing any citizen can do to stop them passing such an act. Your “standing” to file suit against the law comes only when you have a daughter to hand over. If you had only a son, you have no right to file in court. Even then they might argue you are a father and no harm would be done to you. Quite possible, only your daughter or the groom would have standing.

Hence, the government gets to pass whatever law it desires even when it flagrantly violates the Constitution. You then have the burden TO PROVE in a court of law that you even have any Constitutional right that is being denied.

If we lived in a REAL free society, government would have to FIRST test whatever law they passed in a court of law to see IF THEY CAN enforce the law under the Constitution. If you have 5 daughters but have no money, you will have to hand them over to your local Congressman because you LACK the funds to file in court to protect your family. Run off with your daughters to protect them and you are now a fugitive from the law who they could shoot on sight.

The burden in a FREE SOCIETY should be on the government – NOT YOU. There would not have been any Edward Snowden if the government had to first prove what they do is illegal. It takes someone like Snowden to reveal that they are acting secretly and illegally. This is why Snowden is an American hero yet he is called a traitor by Obama demonstrating this very point. Snowden did not betray the American people, but exposed illegal government activity to the people. Obama should have had to go to a REAL court FIRST and then go through the court system to establish his actions are Constitutional. This is ass-backwards where they get to do WHATEVER they want, and we have to prove they are corrupt, wrong, and violating our Constitutional and Human rights, and have the money to defend in court when most do not. Consequently, where is “socialism” in this respect when ONLY the rich can afford the legal fees to defend the Constitution?

We need major structural reform both economically and legally. We have to clip the wings of this eagle that tries to fly recklessly against everything that is decent.