It is time to really understand what makes gold and silver rise and fall. Enough of the nonsense about HYPERINFLATION. Even the Bible instructs that there is a TIME for everything and that includes a TIME to BUY and a TIME to SELL. Never trade anything from a buy only position. Governments are committing suicide by trying to confiscate everything. Retail sales in the U.S. dropped in March by the most in nine months turning NEGATIVE -0.2% compared to November that was up 0.7% before the tax increases. This is pointing to a economic slowdown in consumer spending as the first quarter drew to a close. Purchases fell 0.4%t, the biggest decline since June, after jumping 1% in February, based upon Commerce Department figures.Consumer sentiment has also taken a decline this month after employment also declined. Obama and the Democrats cannot grasp that if x = y and y = z, then obviously z = x. Obama argued to reduce government spending meant 700,000 government employees would have less to spend and that would be bad for the economy. He cannot see that raising payroll taxes on the entire population would accomplish the same thing squared?

We are headed NOT into HYPERINFLATION, but massive DEFLATION as government hunt down assets and drive the economy underground. There is no historical precedent for the sales jobs pitched by the so called Goldbugs. It is time to stop being the schmucks that buy every high from the bankers and start waking up to the reality of why precious metals are really needed and how to survive this economic implosion. 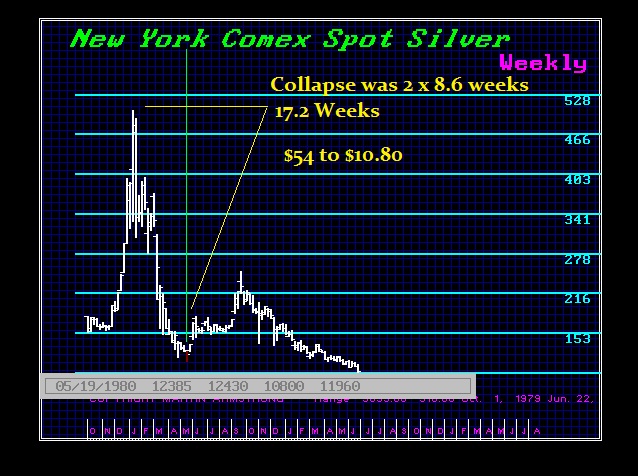 Our Metal 2013 Forecasting Report will be sent this week covering Gold, Silver, Platinum, Palladium, & Copper. The timing for turning points and price objectives for rallies and declines are provided. It is time to comprehend TIME. The 8.6 Pi Frequency known as the Economic Confidence Model has picked the turning points of these major events many to the precise day years in advance. This frequency dominates every crisis. Even the dramatic collapse in silver from the 1980 high was 17.2 weeks (2 x 8.6).