Moody’s has cut Japan’s credit rating by one notch over rising doubts about its ability to reduce debt levels. Japan has the worst debt to GDP among the major nations. It has been able to weather that given the fact that most of its debt is a real Ponzi Scheme being held domestically. We have to get real here. NOBODY intends to ever reduce their debt levels. Let’s just downgrade all sovereign debt – it is a huge joke of everyone. 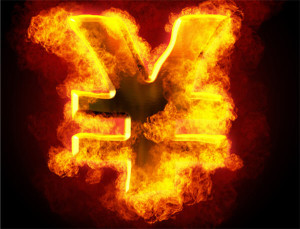 The decision by the ratings agency has sent the yen to a seven-year low against the US dollar. This is part of the rise we see in the dollar to all time record highs as it is flanked by far worse debt to GDP levels in Europe and Japan. This will make the dollar stronger as time moves on.

The Moodys downgrade comes less than a two weeks before a snap general election called by prime minister Shinzo Abe, whose economic stimulus policies and a decision to delay a second sales tax rise will be among the key campaign issues. Career politicians are unable to solve anything anywhere because they have been the main contributors to the financial crisis appearing on the horizon.

So buckle-up. We are on the ride of our lives and it does not appear that anyone is driving. This is a runaway train soon to leave the tracks.

« Gold
Can Money Just be Devalued Creating Deflation as a Solution? »