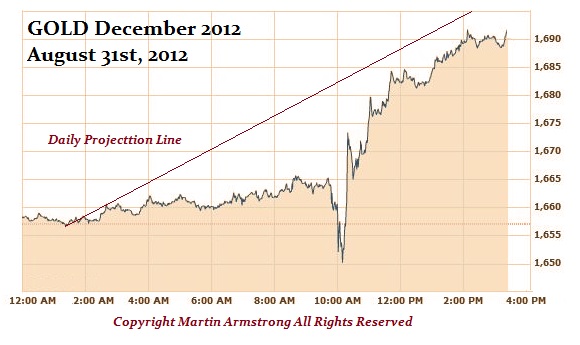 There was no surprise from the Bernanke statement other than basically he can justify more easing if he wants to. He has admitted that the recovery has effectively faltered and is “far from satisfactory,” and as a result, the Fed “should not rule out” new policies. However, Bernanke stopped short of outlining the specifics of any moves to embark on QE3 and next week we have the more important ECB meeting with the Fed due 9/13. Gold has rallied up following the Daily Projection Line from this morning’s low to the first resistance area at 1683 with the Weekly Bullish Reversal. 1674.3 is the high of May which was the low on this move so that has been exceeded intraday. It is always the Monthly Bullish Reversals that are the key to any change in trend even short-term. They still stand at 1770 and 1796. So there is nothing that indicates a change in the trend and we have performed as the computer warned a year ago that a high at this time was in the cards. Of course the rally comes on the back of the presumption of inflation, but the contraction is still far too great. Unemployment is in a bullish mode and the rising pressure on tax collection worldwide is causing a decline in VELOCITY warning that capital is more likely to go into hiding. With taxes in the USA jumping from 15% to about 45% in January, this will take a lot more than QE3-6 to do anything. Even Keynes argued that to stimulate you needed to lower taxes. Everyone is raising taxes precisely when they should not be doing so, But governments are desperate to keep interest rates down. Inflation tracks interest rates. When they start to rise, then the recovery will begin and inflation will at last emerge. If government stupidly continues to buy back bonds, sell them to them. Take the cash NOW! The next leg will be when they start to chase money and it runs away and then rates will rise rapidly. For now, even Italy sold its long-term debt. There are still a lot of stupid people buying government debt. The fat lady remains silent.