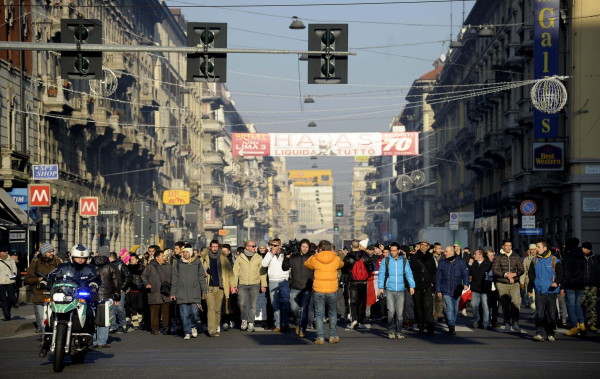 On Wednesday before the vote of confidence in Parliament, the government locked down itself in Rome fearful of the rising discontent in Italy. The Italian government fears violence at parades a whole new protest movement. This protest is growing from Turin, spreading to Genoa, Milan, Alfano, Rome, Savona and numerous other cities. This is what Homeland Security is worried about in the USA and what they bought tanks and bullets for domestic use to also protect American from America – or is it government from the people. Governments always delude themselves into believing they are the nation when it is the people who are sovereign not politicians.

The protesters are carrying their icons, which are pitchforks (“Forconi”). The movement began in Sicily back in 2011 that has inspired all of Italy at this point as millions are now protesting throughout the country with a solidarity against wasteful and corrupt government. We are seeing the same rising trend in Ukraine and in South America. Government has abused the people perpetually.

There are videos now posting showing in some places the police have joined the protesters. This Forconi (pitchforks) movement is a very different type of movement than which has appeared before and has taken on a show of force. This is scaring the hell out of governments everywhere for they know they are in trouble and Socialism is collapsing everywhere. But government will dig in its heels and kill its citizens before ever relinquishing any power. They cannot grasp how everything is collapsing around them. They actually think confiscating people’s wealth to keep the banks going is somehow going to keep the system from falling to dust.

This movement is very similar is respect to the discontent that we saw rising from the anti-bank protests by Occupy Wall Street a few years ago. This is the source of the problems and we face serious civil unrest right on time with the Cycle of War. That model seems to be spot on.

« Euro & Its Rise with Deflation
Deflation Causes a Currency To rise »