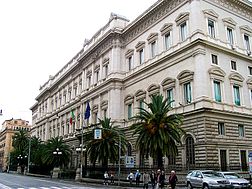 In the United States, Wall Street opened lower as the demand at an Italian debt auction came in much softer than expected. This is starting to spark concerns over the financial health of the euro zone among those who are beginning to grasp there is a problem with absolutely no solution and the bullshit mixed with band-aids is just not stopping the bleeding. Cyprus is CRAZY for staying in the Euro – they are strip-mining their people for a currency that will go extinct. .

European ministers are just brain-dead if they think they can screw Cyprus and pretend to hold the Euro together – good one. Just because of the German elections and the fears that Merkel will lose if he aids Cyprus, has no place in national leadership. Sometimes you have to make the right decision even if the masses do not understand it. In this case, either you have the Euro or you do not. You cannot continue down this path without destroying Europe. There is no permanent solution here.

The Euro has broken BELOW the 128.24 level. The markets are showing the collapse in public confidence in Europe as a whole. Politicians just are NOT capable of managing an economy. They are certain disaster WITHOUT EXCEPTION. If Europe is not going to honor what it promised, why would ANYONE buy their debts? Is that so hard for them to understand?

« Politics
Are we Headed into a Mad Max Scenario? »