Interest Rates will Soar into 2015.75 and Beyond 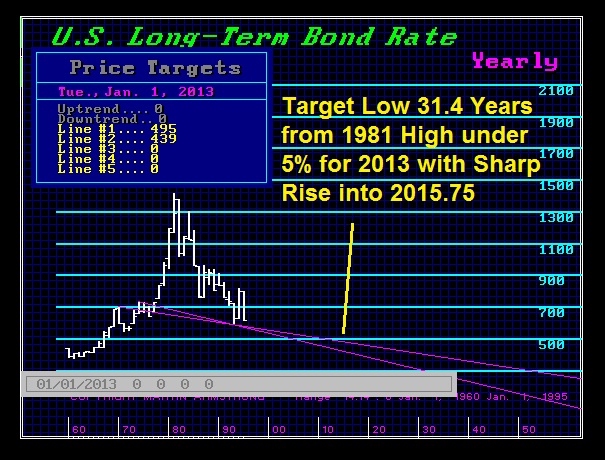 Here is our 1996 forecast for long-term interest rates that we put out with the dollar low in 1995. We warned that interest rates would bottom on the Pi Cycle 31.4 Years from the 1981 high. That would be followed by a very sharp rally in rates into 2015.75. This was all part of the forecast for the Sovereign Debt Crisis. So to answer all the questions coming in about interest rates – beware of any bond fund. They will crash and burn.

The Fed bought-in 30 year bonds trying indirectly to support the housing market. They fulfilled the cycle perfectly and now we will see rates rise faster than ever before. Thus, everything is exactly on schedule. 2013 is the turning point in rates.

« Can we learn collectively from the past and take one giant step forward for mankind?
Domestic Panic v International Contagion »