Thank you for answering my question. Would l therefore be correct in thinking:

1) It is a casual (indirect) relationship between interest rates and inflation rather than direct (ie, the strengthening economy will result in short-term cost-push inflation) 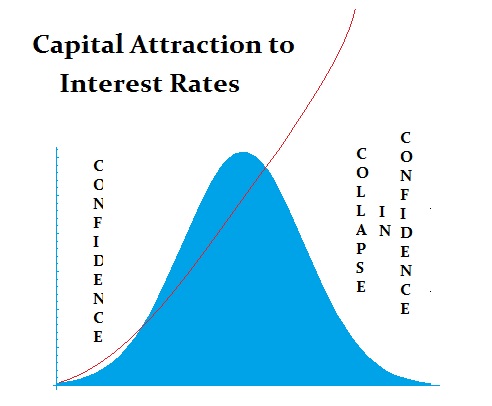 ANSWER: The one maxim your mother told you is all things in moderation. Red Wine is great for the blood and heart. However, drink too much and you will kill the liver. Years ago they studied two groups of mice. One they fed whatever they wanted and the second what was just necessary. The second group outlived the first by about 20%. They have discovered the Longevity Gene and this illustrates above all the bell curve phenomenon. Everything will have an effect up to a point and then reverse that effect. Interest rates will rise with DEMAND in a boom. However, they will rise exponentially when someone needs money desperately. This is the difference between a bank and a loan shark.

At the core of all assumptions is this linear expectation without even defining that as the starting point. It is good to observe this phenomenon so that you can avoid logical fallacies and traps. There is ABSOLUTELY no relationship that is perfect and concrete remaining solid forever. 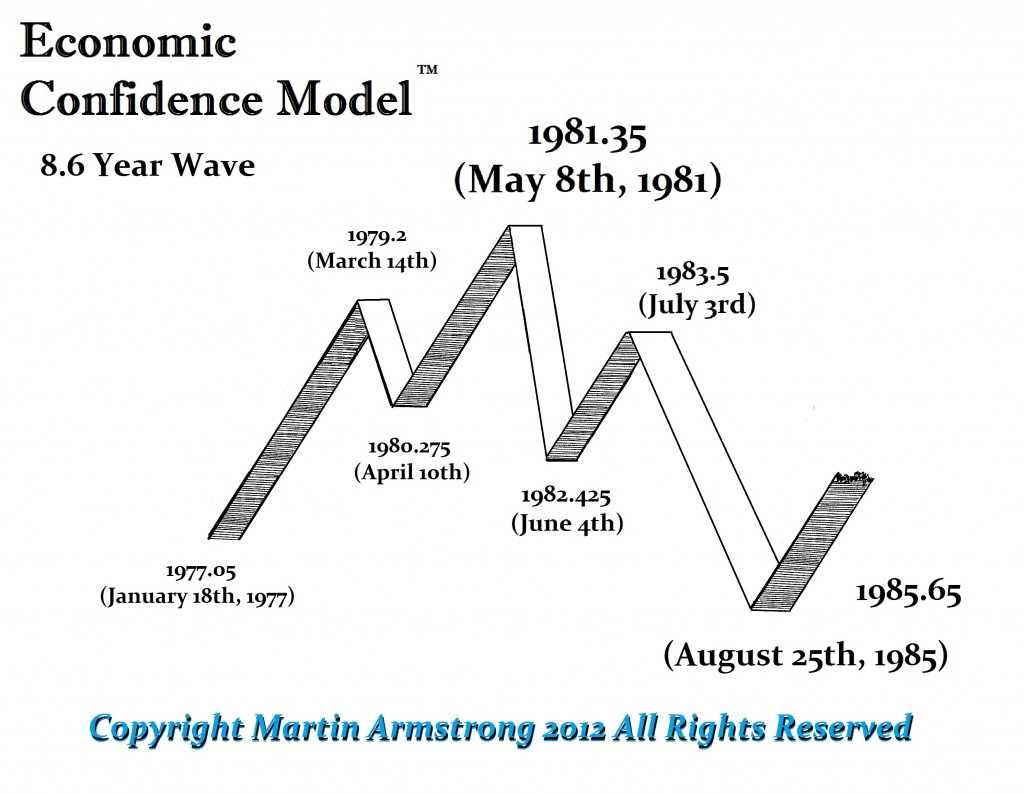 It is more than a simple casual relationship between interest rates and inflation that of course is not direct. There will be little impact upon inflation until the cycle gets underway and that will then create a feedback loop resulting in short-term cost-push inflation, which lags. People will start to buy and that increase in demand will eventually be observed and start the cost-push demand led inflation trend. Then at the top, the demand subsides yet prices then overshoot. There is a lagging relationship in general.

For example, inflation continued to rise into 1981.35 with our Economic Confidence Model right on point while nominal inflation peaked with commodities and gold January 21, 1980 more than one year before. Hence, rates and cost-push inflation far exceeded the nominal real demand inflation perceived by investors.

It is the interest rates that will cause the exploding government debt and not monetary easing by a central bank. The debt will rise on auto-pilot and they will have to scramble to deal with it. Likewise, the press will not pay attention to this trend until it is too late because it is on auto-pilot. The Fed is trapped between a rock and a hard place screaming at Congress they have to curtail spending behind closed doors because UNLESS they start to allow interest rates to rise, there will be a massive default of pension funds. This has the Democrats insisting on tax increases and Republicans demanding spending reduction.

Rising interest rates will NOT weaken the dollar until it passes the point of maximum entropy at the top of the Bell Curve. It was the raising of interest rates to fight inflation into 1981 that drove the dollar to new record highs (BP $1.03 in 1985) and led to the creation of G5 (now G20) to manipulate the dollar lower. WHY? Because the rising rates did NOT create a collapse in confidence to the point of any expectation that the US would never pay its debts. Hence, capital ran out about bought government bonds paying 17% and asked – got any more?

Over the long run higher interest rates creates long-term structural inflation because that is the cost of capital. People will not lend money BELOW what it will be worth upon repayment.

However, ironically deflation emerges because of government. raises taxes to meet the growing debt obligation as it tries to sustain itself. While coinage in Rome may have still been gold, the government imposed taxes either in kind (goods/food) or in bullion – not coin. In other words, they debased coinage and reduced the weights, but they imposed taxes based upon weight. Hence, they created deflation by (1) refusing to accept its own money in payment for taxes (denial of legal tender) and (2) raising taxes with a declining economy.

The population of Rome collapsed, but you cannot take real estate with you. This is why I have distinguished between MOVABLE assets and NON-MOVABLE. If taxes on real estate keep going higher and your income is declining as we are starting to see in the current Western world, this produces DEFLATION. Your disposable income will decline because the share taken by government rises. Consequently, this produces STAGFLATION as costs rise NOT due to demand but rising costs, but there is a decline in net velocity of money as it hoards refusing to invest and vanishes due to the collapsing disposable income.

This whole process is a BELL CURVE. Some taxes are not destructive. Obama and the Democrats are demanding significant increases in taxes and they intend to get rid of the Republicans in 2014 and will rape the economy thereafter setting the stage for a far worse economic contraction 2015-2020.

The vast majority of analysis is flat out wrong because it tries to create an established relationship that does not change. In analytical science, we are still dealing with prejudices and thinking process that assumes the world is flat. This will not change until it is forced to change. I will not say what university I met with. But in a private meeting I was asked if I would consider teaching. They admitted to me there and then what they taught in economics did not work. We are getting there – step by step. It will take a nasty crash to change this way of thinking.