Because of the seriousness of Germany forcing deflation upon Europe that could result in war, this fear of hyperinflation is just not warranted and must be addressed. ALL core economies simply collapse in Sovereign Debt Default. Hyperinflation takes place in the peripheral economies and is caused by the failure of capital to invest that is also witnessed by massive hoarding of wealth. 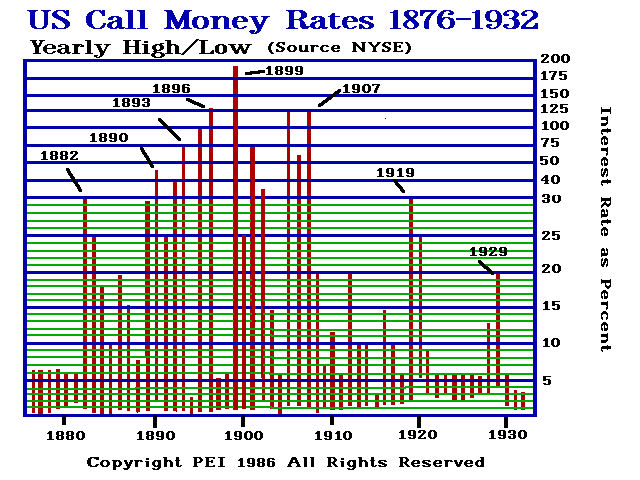 All currency is fiat to varying degrees even in ancient times long before paper money. It has always been a matter of CONFIDENCE and once that vanishes, collapse is inevitable. This is also why the stock market has never peaks with the same rate of interest twice. If the CONFIDENCE at that moment between expectations of profits exceeds the rate of interest, then the bull market will continue as expected profits above the cost of borrowing remains bullish. This is why interest rates have hit as high as nearly 200% in 1899 on the NYSE. If you think you will triple your money next year, you will pay 100% interest. It is the difference between expectation & the nominal interest rate that counts.

Likewise, all core economies collapse and take down everyone else with them. They are the Dark Cloud of doom. When Spain defaulted several times, they destroyed the Italian bankers. Banking then moved to Germany. They defaulted on them as well. They used the Spanish Inquisition to confiscate assets causing the Jews to flee to Amsterdam. That is where the first exchange began and in 1689 William of Orange took the Dutch financial know-how to Britain. Britain collapsed after World War I, and the Financial Capital of the World move to America. This is why the Financial Capital of the World migrates. It leaves behind a economy decay of default – not hyperinflation.

Because the core economy has attracted capital, it becomes the greatest debtor. They default like a bank when there is a run on its assets. Hyperinflation unfolds in a peripheral economy when they can no longer borrow and seek to continue to pay their bills with currency that goes into a spiral decline.

We do not face hyperinflation in Europe or the USA. These are not peripheral economies. These will simply implode into a Sovereign Default. This is far more dangerous for this is what causes war and brings society to the brink of extinction. Hyperinflation is typically domestic in its impact for foreign capital fled long before. What we face is much more like a bank run ending in collapse. Then the finger-pointing follows and usually war.

You can die of extreme heat or extreme cold. When hyperinflation strikes the fringe economies, it does not alter the trend of the core economies. They are interesting to watch from the sidelines. However, when a core economy crumbles, this creates far more dangerous consequences. The fall of Rome was followed by a Dark Age. The same was true with the fall of the Greek heroic age.

Given the urgency from Europe – we hope to have this out by the end of the summer.

Gold is still a hedge in ether circumstance. However, the hyperinflation is but a curiosity where as the Sovereign Debt Default wipes out society for a very long time. It is like an Ice Age – nothing grows for quite a while.

Based upon urgent requests from Europe, the hard evidence behind this distinction will be published in hopes that some politicians will at least blink.

« Europe’s Back is up Against The Wall
Paradox of Government »