QUESTION: It seems some people play with the definition of hyperinflation and try to claim that is just 25% or more. This just does not seem right. Can you elaborate?

ANSWER: Real hyperinflation is in the thousands of percent, We saw inflation hit 25% numerous times including going into 1980. The dollar did not die. This is just total nonsense. There is absolutely no evidence that “hyperinflation” is 25% because that can be hit and the economy flip back to deflation as was the case between 1980 and 1985. REAL Hyperinflation comes in revolutionary government because they have no credit and can only print as the communists in Germany, but when that unfolds, no government has survived even beyond 3 years. 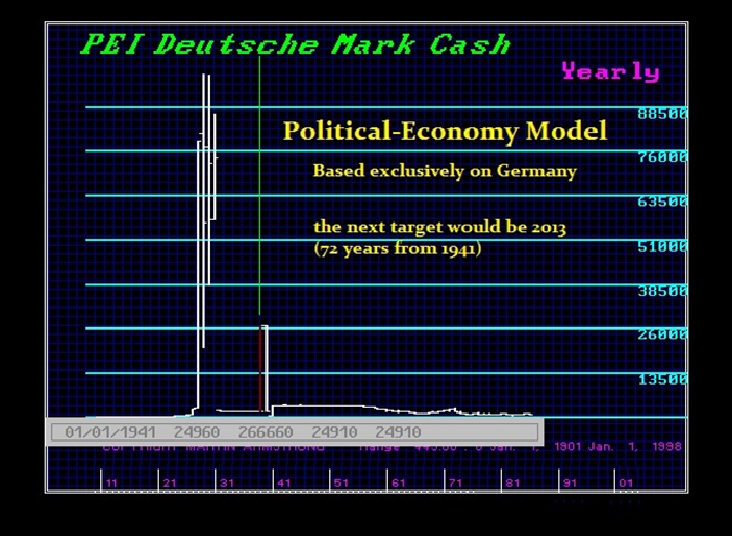 The Weimar Republic was born in 1919 and its currency collapsed into hyperinflation between June 1921 and January 1924. Guess what? That was precisely a Pi Cycle of 31.4 months. That is the MAXIMUM such hyperinflation can exist. So please. I can claim hyperinflation starts now at 10% and argue see, I am right. Good luck. Stop the nonsense. There is NO return from hyperinflation when inflation can hit even 50% with the current government surviving. So what do you call the German Hyperinflation to distinguish that – Super-Hyperinflation? Come on, 25% is by no means Hyperinflation and if you have to lower your threshold to that level to pretend you are not wrong, that is a serious ego problem.

Hyperinflation can ONLY be defined as a level of inflation from which there is no return. This nonsense that ALL FIAT currencies die by hyperinflation is propaganda. China  has ALWAYS had “fiat” currencies. In fact, merely because in the West they used some gold and silver in coins did not mean they were not fiat. A fiat currency can still be gold – it is merely government declaring of gold is now $10,000 as of tomorrow. ANYTHING that is declared against a free market can be said to be fiat.

They debased coinage routinely, which is why Jean Baptiste Say (1767-1832)  argued money has never been “tangible” or a store of value. So simply making money out of gold or silver does NOT prevent the very evils the gold promoters attribute to fiat. The raw fact is it has NEVER been the money that is the problem. It is the government. We had the gold standard under Bretton Woods that collapsed in 1971. Why? Because they tried to fix the price of gold while printing more money all the time. Hello! It is not fiat that is the culprit – it is fiscal mismanagement. You cannot show any period in history where simply because money was gold there was no inflation and Utopia existed. If that were the case, then why do Empires, Nations, and City-States all collapse regardless of what was money? This is the same logic that carrots are lethal because everyone who has ever eat a carrot has died.

HYPERINFLATION is not 25% or 50%. It is a rate of inflation from which there is no return. EVERY major empire has collapse from DEFLATION, never HYPERINFLATION because government hunt down their citizens and that causes money to hoard and the economy to collapse. This is why unemployment among the youth in Europe is over 60%. Ask them is this inflation or deflation?

« Earthquakes – Predictable?
Gold to be or Not to be »