Honey & Decline in Bee Population on target for 2019

Thank you so much for saving me from unending opinions and the latest flavours of the day.  I have been reading your material for a couple of years now and I have truly had a transformation in perspective.

You mention periodically that the history of the world has been put into your computer.  I have wondered to what extent does that history entail?   I’m a beekeeper in western Canada and would like to know if your computer model can give insight into the price of honey going forward and the health of the industry as a whole.  As you are likely aware this often forgot about segment of agriculture is having difficulties with disease, parasites, colony collapse disorder and heavy chemical exposure.  The world can live without gold…..but we need the bees for our own survival. 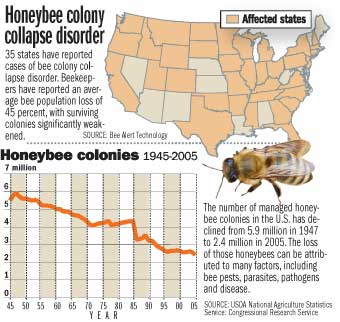 ANSWER: The collapse in Honey Bee populations is alarming. The Colony Collapse Disorder (CCD) and external factors affecting honey bees has had a significant impact upon price and dumping of honey coming from China. China is a major producer of honey – as of 2006, they account for 25% of all exported honey in the world and 20% of the total world output of honey. Its major competitors are Argentina and Mexico. China, however, only exports about 27% of their total output, and unlike many countries, they have kept their prices well under the international average, and thus stable.

Meanwhile, the health of honey bees is critical for they are a key factor in agriculture through pollination of many food crops. Indeed, beekeepers must overcome many challenges, like varying weather conditions and CCD, to keep their honey bee colonies healthy. This decline in population has some serious implications for food prices in North America in the broader-term. Honey can be imported from China, but the bees in China will not pollinate North American crops.

We just so happen to have included honey and bee population in our database because it is critical to agriculture. The cycle in play for the decline in Bee Population (CCD) will not reach bottom until 2019. Prices, however, are likely to peak here in 2015. This will be the result in a decline within the demand side that will see further exports from China. This will be one factor that should also lead to rising food prices.