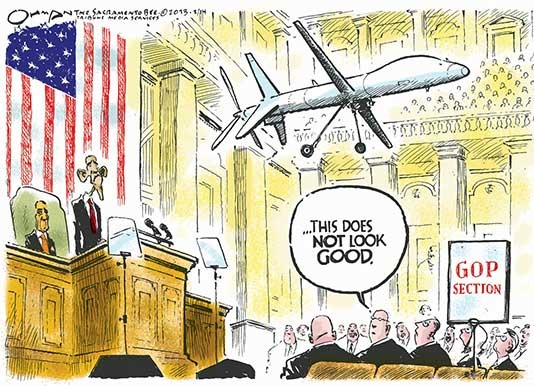 Here come the DRONES: The Federal Aviation Administration now predicts that 30,000 drones will patrol U.S. skies domestically by 2020. New Jersey drivers are going to see them a lot sooner. These unmanned aerial vehicles will be hovering above the New Jersey Turnpike and Garden State Parkway by 2015. Naturally they say: think of the missing children. What politicians are really thinking about is revenue. They already have cameras on almost every red light. They have been handing out tickets not just for going through a red light, but stopping slightly beyond the white line. New Jersey motorists are now suing Cherry Hill where more than 17,000 motorists have been fined by the cameras at one location. People are hopping mad arguing that these cameras do not give them enough time and are handing out tickets like it is candy on Halloween.

New Jersey, with probably the highest property taxes in the nation, just can’t get enough money out of the pockets of people. They even put in an exit tax if you want to leave the state because of the high taxes. New Jersey lawmakers from both parties have now expanded their revenue powers by moving to drones that will no doubt hand out speeding tickets. Traffic generally moves at 80 miles and hour though listed as 65 limitation on the major highways. Even a State Trooper will not give you a ticket unless you go over 80.

One man was a judge in a local municipality and the politicians told him to fine everyone at the max. He refused, saying some people could simply not afford it. The politicians demand anyway so he quit. This is all part of the debt crisis. These people need more to pay their own pensions and all their family members who they employed.

« NSA – Engaging in Industrial Espionage?
Why do Foreigners Buy Property in London and Paris? »