Governments Are Broke Now they Are Turning People Against People

New York City (NYC) is turning man against his brother all for money writing their own epitaph. NYC telling people to video tape cars just idling in town who they will then fine and the rats will be rewarded. This is precisely how Rome was torn apart and it is amazing to watch how history repeats because these politicians will NEVER reform so we must watch how they will destroy society leading to the inevitable crash and burn – the end of NYC as was the case for Rome.

The basic reason civilization emerges is because people fine that there is a synergy which comes forth when people cooperate together. This first begins by forming tribes to hunt together increasing productivity while reducing risks. Undermine society’s benefit to come together by turning man against his brother, and you get the destruction of civilization. This is precisely what goes on in North Korean where people are expected to rat out their neighbors. I went to East Berlin before the Wall Feel and the same thing took place. People would never speak freely if there was anyone close to listen and report their anti-government views.

Now New York City is now adopting the very same policies as North Korea and East Germany. It is government’s self-interest that matters, not the welfare of the people. We already have this rating out of others in taxes and it has been greatly used scaring the public to the point of insanity. When a man recently got up on a plane to go to the lavatory, another passenger called the stewardess to say he thought he was a Muslim. He was dressed normally and had passed all the checks. Nevertheless, we have people monitoring others now in a state of paranoia.

The woman who called police because a young black man was buying a BB gun in Walmart has blood on her hands. Her paranoia led to police shooting and killing the family of a man at an Ohio Walmart shooting him dead John Crawford III gunned down inside Walmart because government has turned civilization into a state of paranoia. 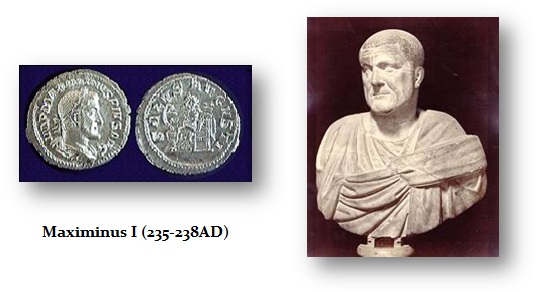 The death blow to Rome was struck by Maximinus I Thrax (235-238AD). He was so evil and destructive to civilization, Historia Augusta attributed him to being not even a Roman, but a barbarian who managed to serve in the army. He was born in a village in Thrace bordering on the barbarians, indeed of a barbarian father and mother, the one, men say, being of the Goths, the other of the Alani according to contemporary records.

He declared all wealth in the empire belonged to him and rewarded spies to report on anyone suspected of having wealth. This caused the economy to implode and the VELOCITY of money just collapsed as people were afraid to be seen with any wealth.

This is what government is doing once again. Instead of recognizing that REFORM is mandatory for our future survival, governments are hunting everyone they can to shake them down for money be it FATCA in the USA or French police searching tourist for cash. The police in NYC will now surround a limo. If the company has any outstanding tickets not even with that particular car or driver but any, they throw the passenger out on the street and seize the car towing it away. The police now move with tow-trucks on the hunt for money making it risky to even use limos in NYC.

Now offering rewards for citizens to turn in other citizens, NYC has cross that line and set in motion its own decline and fall all for greed. NYC will now destroy the link that held society together. Society functioned out of a collective mutual synergy that emerged by coming together. Once you break that bond, you turn man against his brother until man exists no more. This is the very cardinal principle that forms the very reason for creating civilization. Destroy that synergy and you transform it into paranoia and then society crumbles into dust. You end-up with a collapse in economic activity as people fear one another. This is how you destroy society and all that is left standing are ruins like the limbs of a fallen giant.

History repeats because those in power are always corrupt and will always turn against the people to sustain their way of life and power. They never see what they are doing is destroying the very reason we form civilization – cooperation that creates a synergy. This is HOW empires, nations, and city states fall and why history repeats. It is the eternal battle between the people and those who would be king.