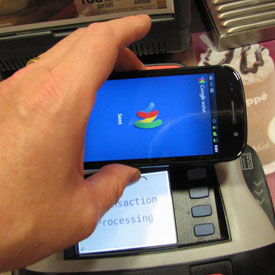 The real birth in electronic money is not Bitcoin, but Google Wallet. Standing in line at Starbucks you will see the under 25 crowd pay with their cell phones. Sorry, but Google is already there. Bitcoin cannot compete nor will traditional banks. Just as Amazon reduced book publishers to a subservient role at their direction, and book stores went out of business, while the internet is rendering newspapers obsolete, the trend to pay attention to is Google Wallet, which is targeting the traditional banks.

Google has launched in the US market its electronic purse known as the Google Wallet. This form of electronic money enables users to pay for the internet as well as a rising number of stores like Starbucks. However, Google Wallet also allows you to send and receive money. In Europe, the search engine already has a banking license and could start at any time. Because Google’s Android operating system runs on many smartphones, the company has the ready market globally. Google Wallet has the best conditions to establish their electronic money in Europe including Germany and Switzerland than any other system. The younger the generation, the greater the market share Google already has in place. Extending their business into banking will be much easier than anyone anticipates. Google is poised to emerge as a bank that nobody seems to quite appreciate at this time.

Apple’ latest iPhone is also equipped with a fingerprint sensor. The strategy in product development is clear. With this technology, your cell phone can become the most secure credit card because it  will require your fingerprint to function. Apple is using this technology in its  music platform iTunes that again is used in a greater proportion as you move down the age group..

Facebook is also applying for a banking license in Ireland. They intend to offer banking using its vast worldwide online network throughout Europe. We are looking at a younger generation moving rapidly to electronic money much faster than the older generations even think is possible.

We will see Google and Facebook emerge with electronic accounts for a client-base that will increasingly move away from brick-and-mortar banks rendering them obsolete just as Amazon wiped out a lot of bookstores. A Camera shop that has been here in my neighborhood for 40 years is closing at the end of June. When I ask why? The response was they cannot compete any long with their expenses.

Banks are dinosaurs and are simply incapable of competition. They are as incapable of competing as the local camera store or the newspapers that cater to the older generations, not the younger. This is a wave of Creative Destruction that is in part contributing to the rising systemic unemployment as technology renders many jobs obsolete.

The Internet giants of Google, Apple and Facebook already have the millions of customers established. They are tracking their buying behavior precisely. They can target customers like never before and making the next step in banking to lending will be a breeze. Credit applications are already being approved electronically in minutes. This makes much of the banking staff redundant.

Moving to electronic money is being aided by this technology shift. So while the older generation pray for Bitcoin, the real money is in the hands of Google, Apple, and Facebook who do not have to sell their names to get people to trust them and like PayPal, you can keep your account in your home currency and pay in whatever currency you desire.

Companies will ne moving more and more toward this shift in money. Once we see Google, Apple, and Facebook move to the next big step of lending, say goodbye to the banks of old. If someone online buys a book or bids for something on Ebay,  his Internet company might will simply then offer you the right loan. Consumer loans are relatively set formulas and computers by default calculate the risks and decide approve of not.

In Germany just over a 25% of all Internet purchases is now being paid for using the Ebay’s subsidiary PayPal, with estimates in volume exceeding almost 150 billion euros. Ebay’s subsidiary has startled the financial industry and offers credit. You can link a credit card to the account and charge that card automatically.The German banks are too traditional to even contemplate how to compete.

As the economy turns down, banks will be unable to comepte with rising costs in a down market. In Germany, the Samwer brothers who have the online shoe retailer Zalando added Lendico, which has a similar concept like Lending Club. This is part of the internet revolution that is as significant as the industrial revolution was back during the 19th century. Banking is a rapidly collapsing industry just as newspapers. Mainstream news will not be around much longer for the younger generation pay no real attention to them and shows like MSNBC and FOX are really just propaganda selling their political views rather than reporting a fair and balanced news service.  Banking will be unrecognizable in another decade.