Gold – The Problem We Face 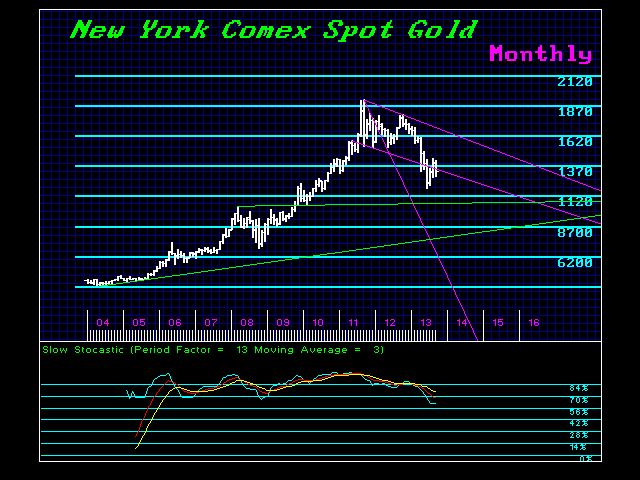 Gold has tumbled sharply and the bearish decline still appears to be moving in full pace. The nonsense put out about gold as a hedge against inflation and the coming hyperinflation trapped a lot of people in the yellow metal. However, I have been warning that we face deflation not inflation and with the $2 trillion-plus Fed balance sheet expansion, gold failed to breakout to the upside demonstrating that the fundamentals talked about just are not real.

Our Daily Bearish Reversal lies at 1283. We still see gold declining and it should perhaps just crack below the $1,000 level to wipe out most of the Gold promoters who have sold their bill of goods to a lot of unsuspecting people. Once that is accomplished, the tree should be shaken significantly and the majority will most likely then be looking for $650.

Nothing has changed on the long-term perspective. We will be issuing another report with the important turning points laid out. We see choppy markets until about next March. This suggests that many will continue to spout out the same nonsense of hyperinflation that will cause serious losses for many and that will then turn them off with respect to the precious metals. Once that has been accomplished, gold will rally like the Dow is doing now with the majority constantly expecting a failure. They will then sell every rally and miss the boat altogether. This is why it is so important to understand the global economy and to avoid the myopic nonsense of looking at just a single market with a single cause and effect scenario.

We are all HUMAN. Nobody is perfect. The best adviser is to learn how to listen to what the market is trying to tell you. The problem we face is bias and prejudice. Never marry an idea that forecloses any analysis of the other side – WHAT IF YOU ARE WRONG?