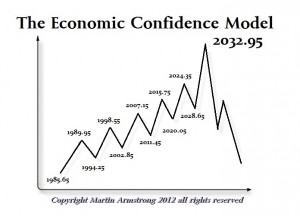 QUESTION: You mentioned back in 2011 that either gold fell in a normal correction of 2 to 3 years and if the market fought against that trend it could extend into 2016 with a 5-year bear market. Is that still possible since you were correct about the drop after a 13-year high?

ANSWER: Yes. That will depend upon the annual closing for 2013. Yes we have seen the back of gold broken for the bounce is what we call a dead-cat-bounce. The major support is 1310. A closing below that level for 2013 will warn that we could see a 5-year bear market creating a cycle inversion establishing a low in 2016 rather than a high in 2017. That would push the high off into 2024 with the culmination of the full 31.4 year cycle that would then line up with 2032. The more you fight the trend, the longer you extend the cycle. That is what happened to Japan.