Gold & The Conspiracy Theories – What About ETFs?

As always, when it comes to gold, the conspiracy theories lead the way desperately trying to explain why the gold promoters were never wrong, so buy more now to prove they were always right. The stories range from massive short positions of 400 tons but fail to mention to sell that much there had to also be buyers who are under water now and could turn seller taking it down another $200. Then there are the typical culprit central banks, and the New York banks in a market manipulation..

There is the simple explanation; that the market was up for 13 years and there is always a correction after such a run because everyone is loaded to the gills, counting their profits at $30,000 gold, and there is just a lack of new buyers. This is the same story for 1980 and even for the Nikkei in 1989. Overwhelming bullishness convinced there can never be a correction. At the high in 1929, they said the market reach a new plateau. 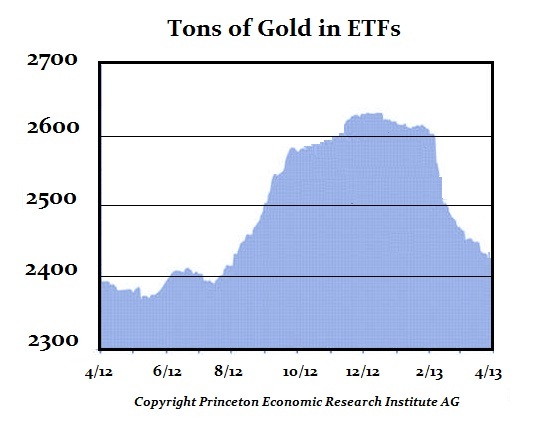 Markets ALWAYS collapse faster than they go up because everyone who ever thought about buying has bought. The gold promoters ran out of fresh meat to convince and were preaching to the choir – buy, buy, buy, and buy more while your at it. Hell – sell the house and buy more! This chart illustrates gold-backed ETF outflows that started early in the new year really took off in February. There has been a major liquidation of “longs” who simply got tired. There is no conspiracy. We are looking at a entire sector going down and capital controls arriving day by day. The rapid liquidation by gold’s most ardent former supporters demonstrates the old saying – what goes up – goes down. If you pay attention to HOW markets move instead of the rhetoric, you just might survive. It’s like a Presidential election. They always same the same stuff – change! People cheer, and nothing happens. The bounce today in gold was not impressive illustrating there was little short covering. This tends to suggest there has been greater hedging rather than outright shorting.. Well markets will be markets and promoters will never admit failure. Unless the crazy bullishness stops, gold may have to drop to $907 to resolve this market. Perhaps that will stop the promoters and allow the market to resume a normal trend.

« ECB Claims South is Richer than North = No Bailouts
Will Pension Funds Be the Target after 2016 to Seize for Our Protection? »