QUESTION: You were correct and gold collapsed into June when the gold promoters kept saying buy. Was the low in June sufficient for the major low? Do we still need to see $950? 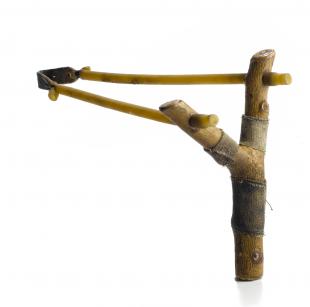 ANSWER: Markets must move to extremes on both sides to provide the ENERGY for the move in the opposite direction. The further gold would decline, the further it will rally. This is what creates the energy. The MINIMUM targets I provided were 1) mid $1100 range and 2) June 2013. We have met that criteria.

So does this mean gold will rally from here? No, The biggest target in time is January 2014. If January were a high at the $1421 level, then we are probably looking for that final low in the months beyond. A January 2014 high would warn that we could see the worse case scenario being the $950 with the furthest time target December 2015/January 2016. A January 2014 new low  would have the potential for the final low. However, you must understand that capital is nearsighted. It focuses largely on one thing at a time. You cannot look at just gold for the answer. This is a dynamic collective economy and everything must be lined up.

Please understand. This is not my OPINION nor is it based upon what I “think” will happen. That is really irrelevant. We all have “opinions”. The important aspect is that you understand HOW markets move so you participate in everything instead of waiting for just a single event. There are no singeltons in life. It is what it is – never what it might have been, could have been, or should have been. 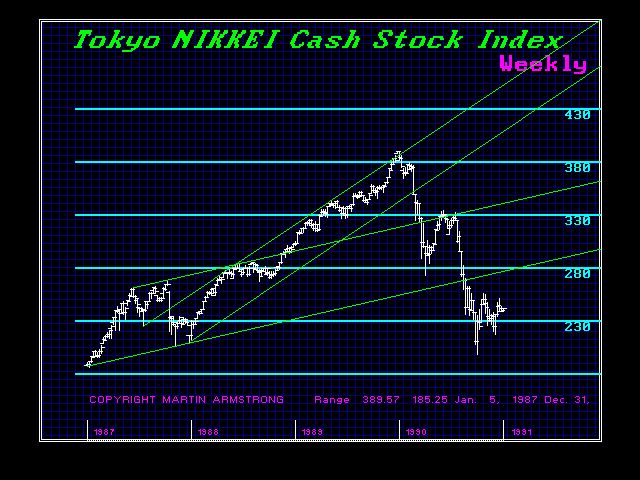 The bubble top in the Nikkei for 1989 began from this same turning point 1987.8 and culminated in 1989.95. You see the sharp crash there in late 1987.The Nikkei about doubles in this short period of time. So what we are looking at here with a possible capital concentration in the US share market that could double by 2015.75 is not unusual. This can push the dollar higher and that will be negative for gold. Private assets rise and gold will follow the Dow Jones when capital is fleeing domestically from the Public to the Private sector, That is the pattern in the Germany hyperinflation period as well – all tangible assets rise. Those preaching the Dow will collapse by 90% and gold will rise do not even understand history. That is possible when gold is the official money but money rises when their is a lack of confidence in the Private sector – not the Public as we have with the Sovereign Debt Crisis. If stocks collapsed, then the bonds will rally. That is the Great Depression and the fundamentals were different. That is was gave birth to socialism. Today it is the socialism that is collapsing. Those who claim there will be hyperinflation and the Dow will crash are insane. If that were the case with hyperinflation, everything rises stocks, real estate, and commodities.

These analysts are fixed on one relationship and the markets are dynamic. They do not follow one relationship perpetually. Domestically capital flows between Public and Private and within the Private from sector to sector. Internationally, Capital flows can be measured by taking the Capital Account and subtracting the Current Account. If the capital is pouring into the USA from 1) emerging markets, 2) Japan, and 3) Europe, then we end up with the same conditions for a bubble top in the USA going into 2015.75.

Swinging a market to the extreme in one direction will then swing it further in the opposite direction. That creates the energy and it is why the majority must always be WRONG! Then if we have the failure for the FLIGHT TO QUALITY with capital rushing into government paper, that is the condition necessary to send gold up and through the $2300 level that is the 1980 high adjusted for inflation.

Those preaching the collapse in the Dow now to 10 cents on the dollar are insane. To do that now send bonds up when there is no widespread sovereign debt crisis that the public sees. Such a pattern simply cannot happen without everything lined up.