QUESTION:
Hi Martin,
Thank you for your valued forecasting and the clarity that you add to deciphering the cyclical nature of those things which govern our world. I am always amused by the arguments surrounding GOLD raised here and on other sites. I tend to hold around 10% of my portfolio in precious metals and historically valued coins and notes. My hope is that somewhere in the future these holdings will at least hedge inflation therefore I don’t stress to much with the shorter term fluctuations. I wonder though of your opinion on a recent article posted on Zero Hedge outlining a number of recently declassified government documents divulging the desire of the US Government to manipulate GOLD. Was  this just a desire, or is it reality.

ANSWER: This is a 1974 Memo and is not relevant today. But to put this in perspective, the floating exchange rate system began in 1971 ad hoc. No one saw this as a permanent solution. The memo regarding manipulating gold is precisely why Volcker raised interest rates to try to stop the gold rally into 1980. It did not work.

What actually happened was the gold window was closed “temporarily” as a negotiating chip.The perception was the Europeans were trying to push up gold and had been redeeming dollars for gold, which is why the gold window was closed. What happened then was this memo from 1974 reflects the manipulation war where France really led the way to push gold higher and the US response was to prevent that rally because it was reflecting a dollar crash.

These trends are really no longer in play. Watergate happened, Nixon was Impeached, and then there was OPEC. By the end of the decade, everyone just forgot about the gold standard and accepted the floating rate system. The dollar rally that followed forced the Plaza Accord (birth of G5 now G20)  where now they wanted themselves to manipulate the dollar lower. Gold faded into the sunset after 1980 and its rise or fall was no longer seen as an implication to the currency. After all, the Dow Jones Industrials rallied from 1,000 in 1980 to nearly 8,000 during that decade. It became the takeover boom and precious metals were forgotten as gold then declined for 19 years.

.I understand that the gold promoters want to claim they are right, but government does not manipulate gold to keep it lower. Government no longer pays attention to gold in that capacity. They watch gold as an alternative and are restricting its storage and movement for tax purposes at this point not because of price. 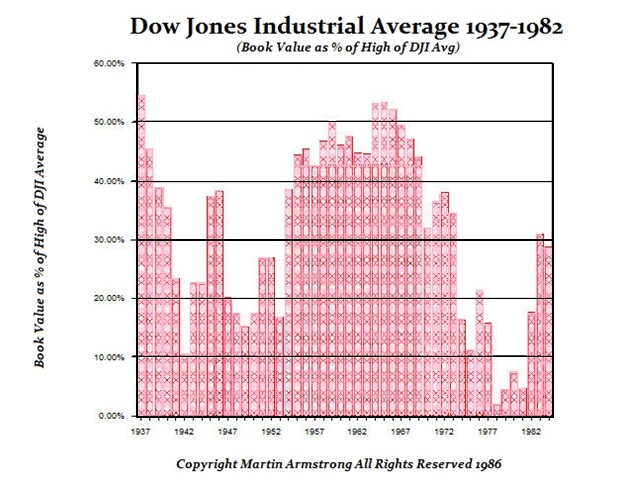 The stock market began drastically undervalued in 1977. The takeover boom was stocks suddenly becoming the focus of being dirt cheap. It became obvious that you could buy companies, sell their assets, and double your money. Stocks were way undervalued because it has been a Public Wave where equities were considered “risk” and Gentlemen bought Bonds.

The same will happen with gold and capital will eventually see it is way undervalued. But that will not begin until the ECM turns down from 2015.75 the same as the gold rally took off after the last peak 2007.15 and peaked with the bottom of the ECM in 2011. It just a question of time for if gold were really manipulated as the gold promoters claim, then it would be a singleton – the only commodity down. That is just not the case. It is the whole sector with few exceptions.

« Ancient Coin Jewelry
Gold – A Time for Everything »