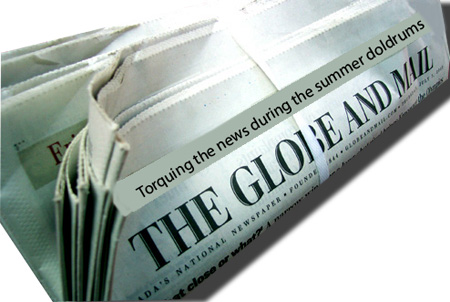 The Globe and Mail

It’s funny to think of someone leaving 24 gold bars in the toilet of a plane.

But that $1.2-million (U.S.) in bullion highlights one of India’s big economic irritants.

According to reports today, the bars were found in the lavatories of a Jet Airways flight to Calcutta, in eastern India. Two lunch boxes stuffed with 12 bars each were found by the cleaners, Reuters reports.

In fact, the boxes sparked a bomb scare on board.

“There was a bomb scare immediately when the bags were spotted in two separate toilets at round 1 a.m., but later we found they contained 12 pieces of gold bars in each,” a Customs official, Rameshwar Meena, told Reuters.

The bars – they’re thin, each weighing 1 kilogram – are believed to have originated in Dubai.

“We are educating [our staff] about aircraft maps of how toilets are in an Airbus or a Boeing,” a government official told the news agency.

“We are also asking the aircraft crew to tip us off about people who spend slightly more time in toilets.”

There are heightened concerns about gold smuggling amid new government restrictions. The finance ministry has hiked import duties several times, and has brought in other rules, as well.

Indians are huge consumers of gold, particularly during the traditional wedding season.

“When you have social compulsions, there are many ways of overcoming restrictions,” Ramesh Babu, the father of a recent bride, told Bloomberg News.

“Irrespective of what the government does, Indians will find a way to get around this because every wedding has to have gold.”

India accounts for an outsized portion of global demand for gold, which skews its trade balance.

In October, for example, its trade deficit swelled to almost $11-billion, according to Reuters, as imports of gold and silver surged ahead of its festival season.

In its most recent annual report, India’s finance ministry noted that gold and silver represented almost 13 per cent of the country’s total imports in 2011-2012, rising by 44.5 per cent.

Demand for gold in India, and how the government acts, can have a significant impact on the market.

Overall global demand for gold slumped by 21 per cent in the third quarter of this year, from a year earlier, partly because of “Indian government intervention in their domestic market,” the World Council said in a report last week.

According to the group, consumer demand for gold in India plunged 32 per cent in the third quarter of this year from a year earlier. So far in 2013, however, demand is up a “robust” 19 per cent, it added.

« Private People are Better Care-Takers than Academics or Government.
Why is Timing Consistent Throughout the Ages? »