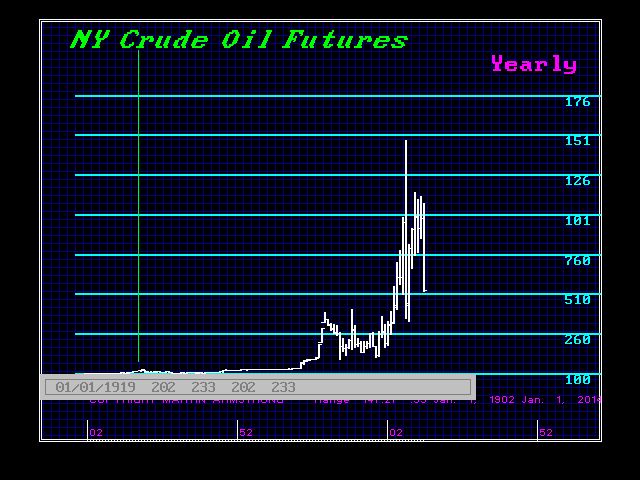 Trying to argue with a Gold Promoter is trying to argue with a Democrat that they should be a Republican. It will never happen because it is their life and how they make money. If we look at the commodity sector as a whole, in 1919 Wheat was 356. It reached in 2008 13500. That is a 37.92 advance. If we take gold in 1919, it was $20.67 applying that advance would be $772. If we take crude oil, here in 1919 it reached 233 compared to a high in 2008 intraday of about 14800. This is an advance of 65.519 and apply that to gold we reach $1335. So is gold really way out of wack when measured against a basket of commodities? The entire premise that only gold is suppressed does not hold up when it is compared to all commodities. Gold is where it should be. It will swing to excessive highs and lows either side of the median. That is what all markets do.

Sorry – no commodity has ever risen in tandem with the increase in money supply. The bursts of “hyperinflation” are not unique to commodities or gold. Everything tangible rises in value including real estate. The replacement currency in Germany to stop the hyperinflation was not backed by gold, but real estate. To argue that somehow metals would be substantially higher BUT FOR paper gold and systemic manipulation is just nonsense. There are futures on everything and the bankers have front-runed clients for years.

Ask the average American do they believe the United States will collapse? Ask the younger generation if when they pay for a coffee at Starbucks with their cell phone do they realize only gold is money. The Phase Transition that results in dramatic sharp increases are all about a collapse in confidence. Slandering me will not make gold rise. It merely shows how worried these people are that what they preach has hurt so many. This is not about some religion or fixed dogma. This is about figuring out how everything function in the world collectively – not a single market.

And by the way, everything alleged by the government was dropped and Republic National Bank/HSBC plead guilty with no jail time provided they return what they took. Slandering me will not change gold. They preach to a shrinking choir and I have gone toe-to-toe with the bankers. Been there live and looked them in the eye. HSBC plead guilty, so why try to cover that up if you are against the bankers?

On top of that, the government escorted HSBC into court to put a GAG order on me to PREVENT me from helping the Japanese against HSBC. That demonstrated to the world whose side the government always takes – bankers v people. And what did the government have me say:

I find it very curious that this movie is all about me fighting against the banks for manipulating government and the markets, yet the gold promoters will do whatever it takes to prevent people from seeing the movie. I really question whose side are they on? Every manipulation from Buffet in silver onward, has been to the UPSIDE in the metals. GATA even knew about Buffet because I spoke on the phone with them. Why are the manipulations to the upside REAL bull markets and only declines are FALSE?

This should be about making money – not supporting the bankers who create false rallies knowing they are preaching to the choir and they have a legion of gold promoters to lead the crowds into buying so they can sell the high every time.

Gold and the commodity sector will rally when it is TIME. They fail to even grasp what BIG BANG is all about. Gold will not rise until the people question government and that is the masses – not a small segment.

« Manipulation and the World is Flat
The Fallacy of Comparisons »