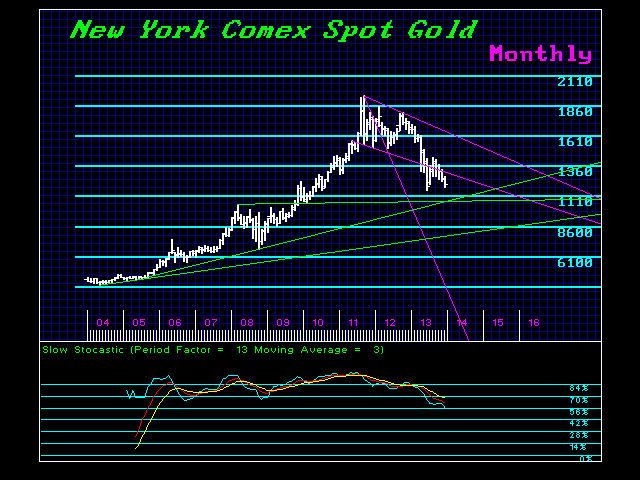 The Monthly Bearish Reversal lies at 1152 and the drop previously was to 1151.40. A monthly closing beneath this 1152 area will open the door to a further decline. The technical support lines up also with the 1980 high area of $875. The first quarter here in 2014 looks choppy, but thereafter, get ready for the increase in volatility. Even the oscillators show this ain’t over yet until the fat lady sings – as they say. Yet they never get tired of painting every sharp break as just another manipulation. I really do not understand if that is support to suggest that they are not wrong even though the price keeps pressing lower? To these diehards, it seems that gold has become a hedge against making money. Gold will have its day in the sun, but it is just not yet ready for prime time. It is still an off-Broadway show.

« Education becoming a Fraud?
Ford Exec Slips and Says the Truth – Now Tries to Take His Words Back »