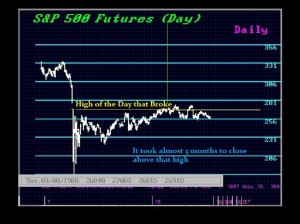 QUESTION: “Let me start by thanking you for all your work which gives me a better insight in how all things are interconnected. I have a question about Gold, as an attendee of the Princeton Conference I received the Gold report. Gold recently broke trough 3 monthly bearish reversals and is now making her way up again. As you told us: when a reversal is elected but substantially below the number (as it did) the market will not follow through but will move back to retest before resuming the indicated trend. The report states that 1469,7 is a technical support which today is broken does this mean gold will continue to move up until it reaches the 1532.5 reversal before resuming the indicated trend.”

ANSWER: Under normal conditions you will move back to retest the reversal that was elected. This is the one exception when there is a serious crash that does break the backbone of support. In the case of the 1987 Crash, it took 5 months to close simply back above the high of the day of the break. Yet there was no double bottom retest and that was the clue that new highs were on the horizon with the top of the ECM in 1989.95.

In the case of gold, that high was 1495 on April 15th, the day before the low. There is no gap as there was for the 1987 Crash. Nonetheless, on May 3rd, June gold reached 1487.2. There is still a chance we will retest the old reversals. However, a daily closing on June below 1385 will signal that a break to new lows is likely. Gold has been crawling sideways between 1439 and 1487. The fact there was no bounce within 3 days back above 1495 warned this break must be taken seriously.

In the Metals Report going out next week, here is an excerpt that is rather important to understand.

“To accomplish a Phase Transition in equities tends to require capital to concentrate in a single sector and region. Hence, we see the bubble in 1929 following World War I in the United States and the Japanese bubble in 1989. Both took place with positive capital inflows. Gold does NOT require this type of capital movement. Instead, gold requires more of a shift in confidence than net capital inflows. Gold is also a worldwide market that does not require capital to concentrate with a particular region or nation.”