Gold All Lathered Up – But Are We Ready to Go? 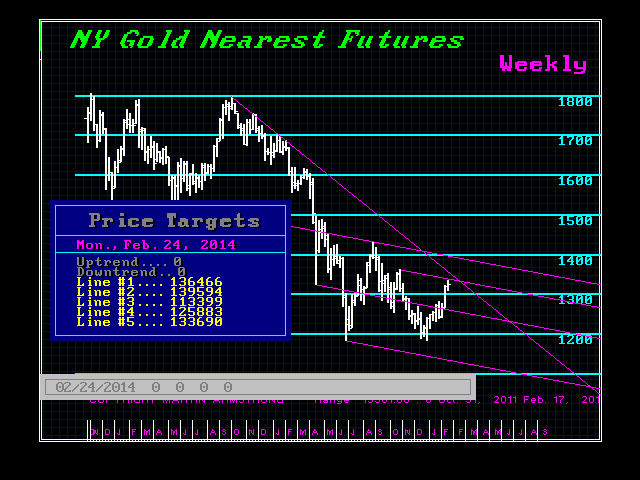 The key resistance in gold on a nearest futures basis stands at the 1400 zone on a technical basis the weekly level. On our model, A Daily Bullish Reversal stands at 1344 nearby while on the weekly level the major barrier overhead remains at the 1420-1425 level. Of course, the gold promoters always proclaim a bull market and quickly forget every decline. Often they seem just like politicians always preaching their own self-interests with little regard for the financial survival of their victims. They act as if you will miss the ENTIRE bull market unless you buy immediately today.

Timing wise, it still looks like the major SUSTAINABLE rally comes AFTER the turn in the ECM 2015.75. From a broader perspective, we really want to see a low with the top of the ECM into early 2016 for that would set the stage for a serious rally thereafter that may at last really breakout above the 1980 high in real terms – not simply nominal terms.

However, the gold promoters never look at the long-term and how the market plays a role within the entire global perspective. The crisis in Ukraine and the LIKELIHOOD that we will see Russian intervention can cause a spike rally in gold. We are not going to be out of the woods on this crisis at least until the after the week of April 7th. That seems to be the real target in time.

Gold will not look impressive unless we see it exceed the 1425 level on a Weekly Closing Basis. Remaining beneath that level into April only warns that we can still see new lows into next year before the whole thing goes nuts starting in 2016. Keep in mind that a crisis in Ukraine with a Russian invasion will send the dollar higher. Russia is already saying the overthrow of the Viktor Yanukovych was illegal despite the fact the people did so in great mass without ANY weapons from the West. The future rally we see for gold has NOTHING to do with hyperinflation, the Fed or other nonsense. This is now in the hands of geopolitical uncertainty and that is where gold comes in – it is as I have always stated – a hedge against governments not inflation as clearly demonstrated with the above chart.