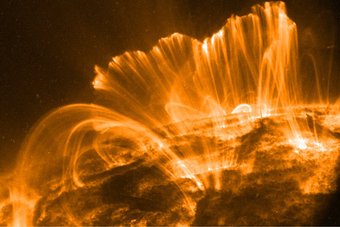 Living in Switzerland and being aware of the little ice age that extended the local glaciers to significantly lower elevations, I was curious to look into the research of  Baliunas. As a citizen of Australia I was gobsmacked to read in the opening pages of this research that links considerably cold weather in the northern hemisphere during the 17th and 18th Century with greater than normal storm activity in the southern hemisphere, breaking up the Antarctic ice pack permitting the exploration by ship at these increasingly southerly latitudes.

So not only did the solar cycle aid Captain Cook in his endeavours, it also appears to coincide with milder than normal weather on the Australian continent that no doubt made it attractive to business and political interests at the time. With regards to that weather in Australia the pendulum is now beginning to swing the other way. I recall paleontologists discovering the remains of the big red kangaroos endemic to the Australian desert in the Sth East of Victoria, which suggested that this region which is a breadbasket of agricultural production and heavily populated was once very dry. To the extent that this will reoccur during the present solar cycle combined with increased carbon output in the coming decades is of course unclear.

This English Imperial interest coincides with economic and social difficulties in the UK, linked not only to increasingly harsh weather but also enormous social, political and industrial/agricultural change. One should not forget the loss of the American colonies as an important source of revenue and a useful social policy tool. That an environmental cycle should perhaps influence or at least interact dynamically with economic, political and social policy directions that leads to the exploration, expropriation and creation of another nation-state is just mind-boggling in its nuanced complexity. One cannot forget the naval technology which was just sufficiently advanced to allow transoceanic exploration of such magnitude at the time. All this would almost seem like grand design if we could not look back at all the moving pieces and marvel at a series of events like this that makes our history (so interesting).

Little wonder that the religious and idealistic are jumping on the global warming bandwagon. Reducing such complexity to a simple cause and effect model is much easier to swallow than contemplating all the potential if/then scenarios that we collectively face as the weather cycle changes in ways that do not accord with our present lifestyle. I for one am happy to play the contrarian view, because I know how right the majority tend to be when their collective emotions are in the driver’s seat…

REPLY: The best I have seen is the Global Warming Crowd are now saying that Global Warming is causing the extreme cold that has hit the USA and buried Tokyo. They have absolutely no research to support their claims and they seem to be unaware totally of the natural cyclical nature of weather. They assume any change is abnormal and do not understand that there is a cycle to EVERYTHING. At times, I feel like one of the scholars fleeing to Rome after the fall of Constantinople trying to explain the world is round and not flat. You can only image the debate. How is it possible to stand on a ball upside down? You surely must be insane! Clearly. the world can only function flat for where is heaven and hell if there is no up and down?

It was weather that was being studied by Lorenz that gave birth to Chaos Theory. What emerged from the data was his famous STRANGE ATTRACTOR.

These people with this Global Warming nonsense ASSUME we have the ability to change the entire planet and do not even understand that the sun is a Thermodynamic entity that means it FLUCTUATES between maximum output and minimum by 15%. Study the Law of Thermodynamics and you will see that there MUST be a cycle.

I was in Australia and the CFO of a major mining company ORDERED that director to meet with me after he lost $80 million hedging. He wanted to review our forecasts and said to each one it could have been luck or coincidence. The conversation was going nowhere. I asked him what was his background for CFOs are rarely schooled in finance or economics and have only met one guy with a MBA and he lost a fortune for that company. When he replied nuclear physics, I said great. Let’s talk about the market from the perspective of Thermodynamics. He eyes widened and his mouth dropped. He was stunned. He looked at me and said – OMG, there has to be a cycle. I said – you got it!

These people are teaching Global Warming to kids in school and blaming man implies man has the ABILITY to manipulate weather. We do such a good job manipulating the world economy claiming we would eliminate the business cycle there that Paul Volcker wrote Rediscovery of the Business Cycle because we failed in that endeavor. Now, these people want to manipulate the entire nature weather system and Obama is proposing $1 billion for research that will probably be for Al Gore’s retirement plan. Can you imagine government trying to control weather? Devote $1 billion for research into cycles and I guarantee I will put together the greatest team in history. Hell – society might actually benefit instead of ex-politicians and their twice removed twisted brother-in-law.

Never will government EVER fund any honest research. To take a grant from government they TELL you in advance what they want the end report to say. Best to move to a country that is too busy with this nonsense. Another reader writes:

It’s funny you should post a message on “Global Warming.” My poor teenage daughter came home last night spewing nonsense about her science class and how they’re teaching them all about global warming etc.  She kinda believes this nonsense, but really, what 15 yr-old child is equipped to protect themselves against such non-scientic harpoons which seem to be cascading down from every quarter of the public classroom these days?

This is nothing new actually. My intelligent daughter is sophomore in high school (in one of the best public schools).. But you know how it is I’m sure,,as dear old dad you try to insert even a slight objection to such drivel, and you are quickly silenced! (“Dad, you’re not a science teacher–i.e. an authority–and you’re not even that knowledgeable about science, your strengths are every other subject but you told me yourself, you didn’t do well in science!”)…Well now, what can a poor father do?

So I listened to her. And listened. And that was the BEST thing a dad can do..listen to their teenage daughter and DON’T say a word. Just listen and show that you care!!!!

It works miracles.. I am SURE that some day (probably soon) she will end up rejecting the global warming nonsense. Why? Because she has a brain and she is very logical and once she has evidence to the contrary she’ll dismiss it. But of course the SCHOOLS don’t offer any other viewpoint than one..the “agenda” as you say.