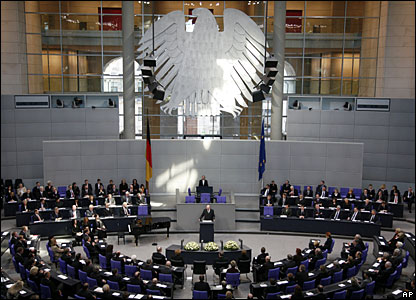 All socialists just see money and justify their taking of other people;s money as somehow just even though their theory violates the Ten Commandments – thou shalt not covet thy neighbor;s wife or goods. The German Socialists are no different. They cannot understand how an economy even functions. All they do is want to take other people’s money for themselves no different than a thief in the night except they do it while justify themselves in broad daylight.

The exemptions for corporate heirs violated in their current form of the Basic Law.The Federal Constitutional Court on Wednesday overturned the existing regulations since 2009 to the generous exemption from inherited business assets are incompatible with the principle of equal treatment of the Basic Law. Basically, it is legitimate to partially or even completely free a family from death taxes, emphasized the judges. Nevertheless, the legislature now has a deadline of June 30, 2016 to create a new regulation.Until then, the current regulations are more applicable. (Ref. 1 BvL 21/12)

The Constitutional Court ruled on a template of the Federal Finance Court (BFH). The tax exemptions for companies heirs violated in their current form of the Basic Law. The Federal Constitutional Court in its decision, however, that there are grounds for lawmakers to spare family – for example, if jobs would be protected.The Supreme Tax Court had asked the tax treatment of corporate heirs against heirs of private property as a privilege in question. After the exemption rule inheritances and gifts are then relieved when in the course of the transfer of the jobs are largely protected. The operation was allowed to continue for five years and kept the employment stable during this transition period. Eventually, 85 percent of the tax will then be due. Exempt from this payroll clause are companies with up to 20 employees, almost 90 percent of all companies.

With the German high court ruling on inheritance tax, the SPD-Left has introduced a new proposal in Germany. This alone illustrates the collapse in the world economy because of socialism that is underway.  The German socialists want to seize small business that employ about 70% of the civil work force globally. When a company’s heir has a tax liability for inheritance that they cannot pay, the state will seize access to shares in the company of family. The state will then destroy the business selling the assets for taxes since they are incapable to managing such a concern. If the tax liability is removed, the heirs may buy back their shares from the government. They do this in the USA taking people’s homes who cannot pay property taxes and sell they at auction.

Take for instance my own case. What if upon my death government said they “believe” the model is worth $5 billion and demand $3 billion in taxes from my family. How is it possible to pay such a tax on their valuation without selling the asset? This is outright theft. Then there are all the employees of the company. What happens to their jobs? The greed of the state supersede human rights.

These socialists who justify confiscating other people’s money for their own personal use never look too closely at the economic impact their actions have upon the long-term growth of society. Just as money has become electronic, there is also no longer a need for taxes. Taxes are a barbaric relic from the past when money was coin. Now money is created mostly by the private sector through leverage and banking and it reflects the total productive capacity of the people. This is how China is displacing the USA. Its GDP has surpassed the USA, not its capacity to provide an alternative to the dollar just yet.