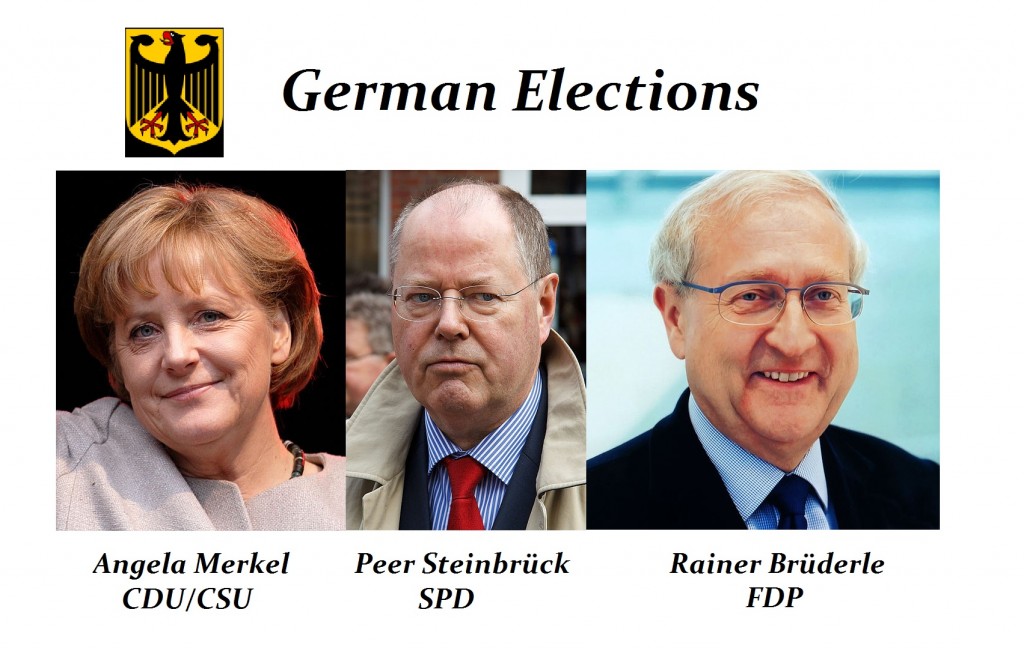 Germany’s parliamentary elections  will be held on 22 September 2013 to determine the 598 (or more, if overhangs are produced) members of the 18th Bundestag, the main federal legislative house of Germany. The elections may by no means bring the expected calm and stability to Europe. Indeed, the elections may well usher in a period of complete chaos and paralysis if not uncertainty for Europe as a whole. In German politics, division is rising between nationalism and Europeanism.  German politics seems to be transforming into an Italian version of fragmented coalitions. Germany is Europe’s biggest economy. A swing toward fragmentation with a protracted and difficult coalition negotiations that leads to political instability, could cripple Germany preventing a viable working government in Berlin.

The danger is that Berlin falls into political gridlock that will destabilize the European financial markets and the Euro. This will further complicate the doomed European reform projects such as the banking union that is unlikely to succeed anyway. If the German elections follow the polls that currently indicate that Angela Merkel’s CDU conservative party CANNOT form a coalition with the free-market Free Democratic Party (Freie Demokratische Partei), abbreviated to FDP, is a liberal political party, then worse-case scenario emerges. Should the FDP to fail to get the 5 percent of the national vote it requires to get even into parliament, or the Alternative for Germany Party (German: Alternative für Deutschland), abbreviated to AfD, which is the new anti-euro party founded (early 2013) defies the odds and wins representation in the Bundestag, then things get really interesting. The AfD is a conservative, euro-currency-sceptic political party rising in Germany that is organising to compete in the German federal election in September 2013. The party states that it is anti-euro, but not anti-EU similar to the original British position articulated by Margaret Thatcher who insisted it was a economic union not political-monetary dictatorship. The AfD is not against European unity, but that the euro has failed as a currency and now threatens European integration by impoverishing countries with uncompetitive economies and burdening future generations. This is an absolutely correct position. Eventually the position of the AfD will emerge as the rational solution, however, for now, if they won this will make a parliamentary majority far more difficult to build in Germany.

The ability of the European Central Bank (ECB) to purchase government bonds has distorted the Euro and the institution’s actual purpose was supposed to be ensuring price stability and not financing governments. Of course this is still based upon Marxist-Keynesianism assuming government can manipulate demand to ensure price stability – something that is yet to be proven. German political party CDU center-right party states this position that the ECB was not intended to buy government bonds. This formal position asserts that the basic ability of the ECB to purchase government bonds without limit if indebted countries fulfill the ESM conditions can only be a temporary instrument. How does one end such a program is never considered. The ECB was intended to be obligated to monetary stability,and was never an instrument for government financing that has emerged of late.

The grand coalition between Merkel’s CDU/CSU with the Social Democratic Party (Sozialdemokratische Partei Deutschlands) (SPD) would then be the fallback option. The SDP is one of the two major contemporary political parties in Germany, along with the conservative CDU/CSU. That may appear to be a welcome change from a European perspective. However, a grand coalition such as this would enjoy a vast parliamentary majority without a doubt. This would tend to be marginally more pro-European. This may result in a policy that is less keen on forcing austerity on the euro zone’s periphery. The last CDU/SPD coalition, which Merkel formed during her first term up to 2009, did work rather successfully.

Nonetheless, the SPD has no desire to team up with Merkel once again. It was devastated back in the 2009 election that resulted in its worst electoral performance since 1930. The Social Democrats will thus be inclined to make the CDU pay a high political price for a new coalition experiment. Some believe the dislike runs so deep that they would insist that Merkel would not be the head. In such a situation, Merkel may start coalition negotiations with the Greens, which will create even more uncertainty for Europe.