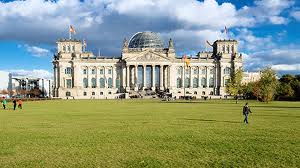 Merkel’s conservatives appear to have won 301 seats in the 598-seat parliament, which is very a thin majority. This eliminated the need for a coalition partner, according to ARD TV projection MIXING results with exit polls. This is not final. A drop to 297 seats compared to 301 for the three left parties, the SPD, Greens and Left could be a problem since the SPD and Greens have said they won’t do a coalition with the Left. The conservative victory may not yet be a full home-run.