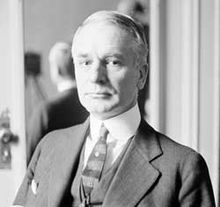 It was Cordell Hull (Sec. State 1933-1944), whose observations during the Great Depression led to his belief in the concept of Economic Security – defined as a liberal international economic system would in return increase the possibilities of postwar peace. This concept of Economic Security being linked to peace shaped the postwar economic and Bretton Woods. Hull believed that the fundamental causes of the two world wars was rooted within the economic discrimination and trade warfare that prevailed as a throw back to mercantilism  Hull often cited the trade and exchange controls (bilateral arrangements) of Nazi Germany and the imperial preference system practiced by Britain, by which members or former members of the British Empire were accorded special trade status. Both of these trends were responses to French, and American protectionist policies.

It was the tension of these trade policies trade barriers, high tariffs, and genuinely unfair economic competition that led to the resolution being war. Free capital flows and free trade meant less discrimination and obstructions.

While this concept of Economic Security at the time did not include migration, that too has been a tremendous part of freedom internationally. The ONLY reason there is anti-foreign immigrant discrimination is the typical view that they take jobs and contribute little to taxation. This has been a byproduct of INCOME TAXES that are direct and the foundation of Marxism. Indirect Taxes on consumption do not discriminate between citizens and immigrants that lead only to deadly jealousy of the living standards of others.

Marxism has led to massive growth of Government and thus most countries now employ between 40-50% of the civil work force reducing economic growth. Between 1900 and 1980, government grew by 50%. There has been no restraint whatsoever for government believes they can raise taxes as they desire and people must simply pay. They fail to grasp the idea that they are “public servants” and reduce economic growth – they do not contribute to the wealth of a nation. This is the huge adjustment that we now face. The collapse in government is inevitable, but it is creating internal tension between those who work FOR government and those who are burdened as economic slaves to earn income to pay for this huge herd of unproductive workers.

Economic Security as envisioned internationally must also be reviewed in light of Marxism that has changed the dynamics our entire economy. The sheer size of government MUST be reduced drastically to prevent civil unrest through unfair exploitation of the people NOT by the “rich” but by government itself.

« Comments from Europe on Europe
Capital Flows as Reported by Central Banks Can Be Distorted. »