France is Destroying the European Economy

What part of Marxism do these politicians fail to understand? The problem seems to stem from the fact that most are lawyers. They know how to write laws and contracts, but most are totally ignorant of the real world.One of the most disrespectful lawyers ignorant of the real world was Samuel Untermyer, who was the Attorney for the US Banking Committee in 1912 who revealed his arrogance and stupidity when he questioned J.P. Morgan. This single event demonstrates why lawyers should NEVER be allowed to run for office (I apologize to those lawyers I know well but we have to call a spade a spade sometimes, likewise I would not have the patience to deal with government but would prefer to scrap it all and start over).

Untermyer assumed that Morgan would lend money based solely upon collateral. He replied – NO! If he did not trust the person, he would NEVER lend him a dime on “all the bonds in Christendom.” To Untermyer, he assumed Morgan was lying. He could not grasp the idea that anything would exist beyond the written contract. Contracts, like laws, mean nothing when contrary to human interest. It is ALWAYS, and without exception, whether that written expression is within the agreeable limits of human behavior. Government can order that everyone must kill their first born. Do you really think there will be no backlash? Likewise, you CANNOT simply take 75% of all income from people and business because you want it and expect the economy will not decline. That DEFEATS the purpose of civilization that is a mutually agreeable arrangement. If you do not like it, you migrated. Now the USA wants you to PAY on future income to resign your citizenship. In other words, you are not free to leave and the PROOF that this is counter to human nature is the very existence of such a law that tries to prevent migration without giving the politicians their “POUND OF FLESH” based now upon FUTURE earning power – economic slavery.

Nonetheless, it was this confrontation between Untermyer & J.P. Morgan that illustrates the problem with lawyers. Knowing the law and how people really deal illustrates the critical problem why government is perpetually against the people. I always had a clause in a contract that I could terminate it with a full return of all fees at my discretion based upon some action of the client. Only once did I ever have to do that in my career. One Japanese company after signing a contract then tried to cheat and argue over every payment they owed to get the fee down from what they agreed. I closed the account and returned everything and they were shocked. I simply said I would not do business with them because I had better things to do than argue every month over fees they owed. When they said I could not do that, I said you cannot agree to fees then try to renegotiate every month. So read the contract – I may terminate at my discretion based upon their action that violated the spirit of the contract.

J.P. Morgan expressed it best of all. Contracts means NOTHING for it is ALWAYS the character of the person signing that contract. This is what lawyers do not get. They write laws and FAIL to comprehend that the world will not automatically do what is against the self-survival instinct. You cannot pass a law and take the majority of someone’s earnings and expect there will be no backlash. Why work if you cannot retain what you earn? Why buy a house if you cannot retire in that house because when your income stops, government keeps demanding property taxes so you never really own your home when they can take it at anytime for taxes they say you owe them. This is robbery and dishonesty at the very core. People will move money offshore, hoard, and refuse to invest. So now we will confiscate the assets of any foreign institution who does not spy on American citizens. That is IMMORAL and contrary to liberty. Marxism is simply against human nature. You can pass all the laws you want, but you will NEVER change the character of human nature. 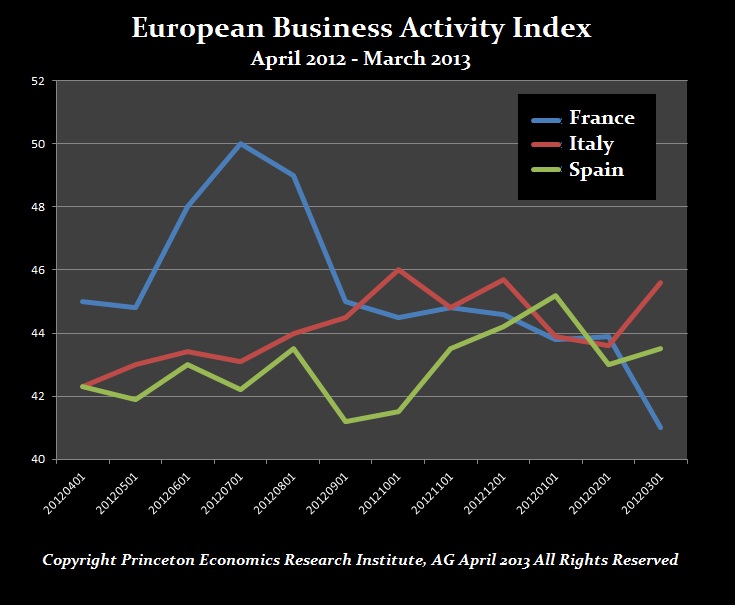 France is destroying Europe faster than anyone can imagine. We are in the last throes of Marxism. Obama is just a lawyer who is no better than the French. He is just as ignorant of economics and the US is showing it too is now starting to contract because of the huge increase in payroll taxes and Obamacare. They cannot get it through their THICK skull that government does NOT create jobs, for government employees are PUBLIC SERVANTS no different than if you hired a maid. She does not add to your household income, she consumes it. That is nice if you can afford a live-in maid, but that is a choice to SPEND your income to relieve you of chores. Government does not create wealth – it consumes it, which is why big government destroys the economy.

Those who have been touting HYPERINFLATION have looked only at Germany, which was the collapse of a brand new monetary system of a communistic revolutionary government and NOT the long-established German economy. These systems do NOT move into HYPERINFLATION but massive DEFLATION as government raises taxes and tries to confiscate everything under the sun to pay the bills. This is why gold has been declining for to their shock, Europe is ready to sell the gold to also try to keep the game afloat.NEVER judge someone else by yourself.