The Pope’s resignation has  inspired many articles about how Popes have even been imprisoned. To set the record straight, the battle with the Papacy has usually been about money. Yes, many Popes have been put through the ringer and others have been appointed like the Manchurian Candidate to control the Papacy. So yes, there is some truth to the stories, but as always, they are typically slightly off the mark.

France has always been obsessed with getting taxes. The Papacy taxes, however, were restricted to the clergy. Clergy would still inherit property from their family and many priests were wealthy as a result of family money that was often used to create monasteries by donating family land. This would later become a major conflict when the French King Philip IV (1285-1314) wanted to tax the clergy himself directly. Hence, the obligation to pay taxes to support the Crusades was imposed as a universal obligation upon all Christian men.

This was the time when banking was emerging from the Dark Ages. The first real major banking center was Siena and it was there when Orlando Bonsignori’s firm became known as the Gran Tavola (Great Table) and the largest banking operation. This is of course a reference to the fact that these banking operations were conducted in the open. The company took on this name in 1255 after his brother Bonifazio died. Orlando then created a consortium that became the most powerful bank in all of Europe, only after the death of Pope Innocent IV (1243-1254). Once Orlando formed this new consortium, the Gran Tavola then became the exclusive deposit taker for the Papal States and under Pope Clement IV (1265-1268), the firm became the banker for the ecclesiastical tithes for the Holy Land until 1270.

Pope Clement IV continued the struggle against the Germans and the Hohenstaufen family that held Sicily. Clement IV appointed Charles of Anjou (1226-1285) King of Naples and Sicily (1266-1285). The Gran Tavola thus also supported Charles and was a lender to his cause. Since Charles was victorious, the Gran Tavola benefited from this sovereign loan and relationship. This made the Gran Tavola a target for greedy kings.

The Gran Tavola expanded with branches in Bologna, Genoa, Marseille, Pisa, and Paris. It continued to retain the position of the banker to the Papacy. There was rising political unrest throughout central and northern Italy with factions whereas the Papal cities were Florence, Bologna, Montepulciano, and Orivieto, confronting the pro-Imperial cities of Pisa, Siena, Pistoia, and Arezzo. The Bonsignori were in the wrong city at the wrong time. Their branches helped to mitigate the problem with the anti-Papal Ghibellines, but that could not hold the political chaos at bay forever. Their Geneva branch was run by Guglelmo Leccacorvo. During this later phase, they expanded into Catalonia in addition to their branches in France and England. It would be this model of the Piccolomini and the Bonsignori that set the tone for all future merchant banking families. Because Siena was pro-Imperial, Pope Boniface VlII (1294-1303) began to shift the Papal deposits to the pro-Papal city of Florence. This would set in motion, a shift of the Financial Capitol of Europe from Siena to Florence. Orlando Bonsignori had died in 1273, and thus the Gran Tavola had expanded into lending to King Philip IV (1285-1314) of France, which would prove to he a fatal mistake, for not merely was there a conflict between the Papacy and the Holy Roman Emperor, but .the King of France was hell bent upon doing as he pleased and was dead against Boniface VIII.

The German historian C. Bauer argued in 1928 that the Papal finance is what enabled the emergence of capitalism. Indeed, the people who donated to the Papacy were widespread. That meant you needed a banking operation that was international. Hence, it was the Papacy that helped create the financial market in Europe and to develop the economy without any plan to do so. It was a natural evolutionary process.

Edward I of England and Philip IV of France seized bankers to prevent lending to an adversary. It was Philip the IV who seized the Papacy and moved it to France installing his own popes all to grab the money. It is always about money with governments. 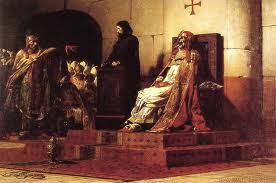 The most dramatic political struggle over money was demonstrated by the trial of Pope Formosus (891-896) that took place nine months after his death by the succeeding Pope Stephen VI (or VII)(896-897). Stephen was a family member of Italian aristocrats who Formosus abandoned and crowned Arnulf, a East Frankish king, Holy Roman Emperor. Once Stephen seized the Papacy, he sought to destroy Formosus’ supporters, and had the corpse of Formosus redressed in papal vestments and propped up on the papal throne to stand trial. Stephen appointed a deacon to answer for the corpse. He naturally convicted the corpse and since Formosus had appointed Stephen bishop of Anagni and there were charges of his irregularity, by finding Formosus guilty of illegally seizing the papal throne, he vacated all of Formosus’ allegations against himself. As punishment for his crimes, his fingers of consecration were cut off and eventually his body was thrown into the Tiber river after being stripped of all vestments. This illustrates the great problem that existed when kings were stacking the papacy for personal gain and control.

The REAL history of the Papacy is all about money and control. Many criticize the Papacy and point to people who had wives and did all sorts of things. What they leave out is the fact that kings were intimidating cardinals to vote for their stooges all to manipulate taxes and grab power. It was never like these notorious popes were actually men of God. They could care less any more than politicians really give two-shits today about doing the right thing. It is always economic survival. They are attacking the Vatican again demanding it report all money movement for tax purposes.Just follow the money – it always reveals tyranny.