I have been warning that the economic pressure began in Europe. It began precisely to the day on Pi following the 2007.15 turning point. This same turning point from the previous wave pinpointed the 911 attack. That said, this was significant. I have been saying the dollar will be the last to fall – not the first. Even during the Great Depression, the Sovereign Debt Crisis began in Austria in 1931. This time, it started in Greece with the Euro. This means that what goes down in Europe is a preview of what is to come in the states. It took 4.3 years from when the European capital flows shifted to the USA began in 1927. We now see the results 4.3 years from 2010. 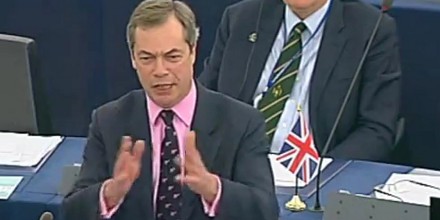 Nigel Farage has won beating BOTH Labour and Conservatives – the FIRST 3rd Party Victory in British History. This is the global trend that the gold promoters have ignored and confused so many people about and the conspiracy-buffs have denied exists attributing Ukraine to the CIA and not really a grassroots uprising. They cannot grasp that 7.5 million Ukrainians were murdered by Stalin and this just might have more of an impact on being anti-Russia that the CIA could ever manufacture. Either they do not know their history, or they are spread political propaganda to hide this trend.

The Eurosceptic party’s victory marked in Britain for the first time in modern history has shown the British press leaning toward propaganda. They all hated Nigel Farage and kept trying to paint him as a nut-job who would go down in flames. Margaret Thatcher was driven from office because her cabinet wanted to join the euro and demolish the pound. That did not happen because the common people are smarter than the politicians.

In France, the birthplace of Communism & Socialism where 50% of the youth just want out, delivered a monumental political upset.  France’s PM called this a “political earthquake”. They are also saying that the “Situation Is Grave For Europe” This demonstrates that the career political class cannot grasp that their day has come.

When I say we are going to see the same trend hit here in the USA come 2016 and the Republican Party will split because they do not grasp what is taking place – I am not joking. Our forecasts on this political development are well-known since we published this back in 1985 and renewed it several times in the 1990s.  Here was a chart from 1996.

Please keep in mind that this has been the computer models forecasting all of these changes – NOT ME PERSONALLY. I am not standing on my soap box saying see – I told you so. I am personally not better than everyone else. Nobody can forecast so many events and be correct from a gut perspective. What I hope to leave society is a new way of grasping the trend. I do not MANIPULATE the world as some have absurdly suggested. I have just discovered a key, not even invented it from some theory.

This is the political unrest brewing. What will be interesting is that with so many Eurosceptics, will they FORCE political change and take the dictatorship AWAY from the European Commission.

Even those in the Bilderberg meetings who once thought a single currency would end world war are starting to see that the euro is promoting civil war rather than international war. It is time the rest of us start to wake up and see the world for what is really going on.

(Yes we have been in contact with him for years).

« Russia Leaks on 911 – Oops! Didn’t Think of That One!
New Allegations Against JP Morgan Emerge in Australia »