QUESTION: Mr. Armstrong; At the WEC you said the Fed would allow its balance sheet to eventually shrink, it was trapped and could not sell off its holdings. Yellen seems to have come out and said the same thing. Is this advice you have given in Washington?

ANSWER: What Yellen has said is that the main tool for setting monetary policy would remain the fed funds rate, not shrinking its balance sheet. It cannot shrink its balance sheet right now for that would be deflationary. Yes, she said that the Fed would likely reduce the size of  its balance sheet over time, but it would KEEP reinvesting proceeds from MATURING Treasuries and mortgage-backed securities for now to “maintain accomodative conditions.”

This is Yellen confirming what I have warned about. The central banks are trapped. They can NEVER sell the bonds they bought, and the best they could do is allow them to mature. However, that would still be deflationary and result in sending rates higher. Yellen’s comments make it appear that the Fed will raise rates to what it perceives to be a neutral rate before making adjustments to the size of the balance sheet.

Therefore, looking at our arrays, it appears the May/June period may be the next target for a rate hike. However, keep in mind that we have the French elections. That can send the dollar rising even more as the Euro caves in. Make no mistake about this. The position of Yellen is responding to the domestic conditions and the breakup of the EU is looking ever more imminent. Therefore, Draghi has been proven to be completely wrong in his attempts to manage the economy of Europe. Instead of creating a recovery, he has deepened the divide and brought the EU to the brink of collapse. Raising rates on Yellen’s party is doing exactly what I warned would unfold. As the dollar strengthens and Europe looks more questionable, the capital flows to the dollar creating the appearance of an asset bubble.

The mainstream media have declared outright war on Trump. The higher the stock market, the more they will turn and blame trump saying he is just making his rich friends richer. This will feed back and compel the Fed to raise rates more to stop the asset bubble, which in turn will attract more capital to the dollar while sending emerging markets over the cliff. 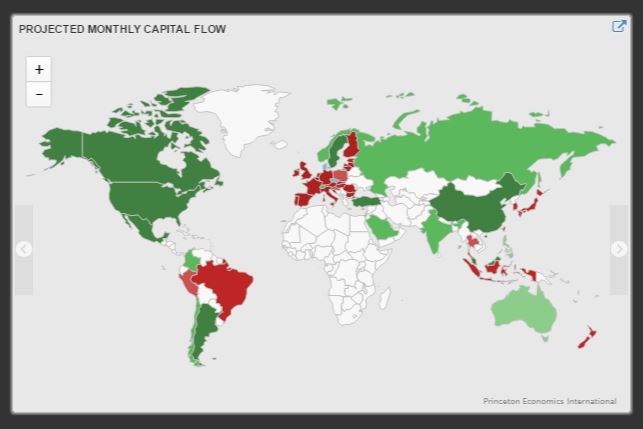 Welcome to the new exciting world of international capital flows.