Facing Arethusa Tetradram of Syracuse Up For Sale May 26 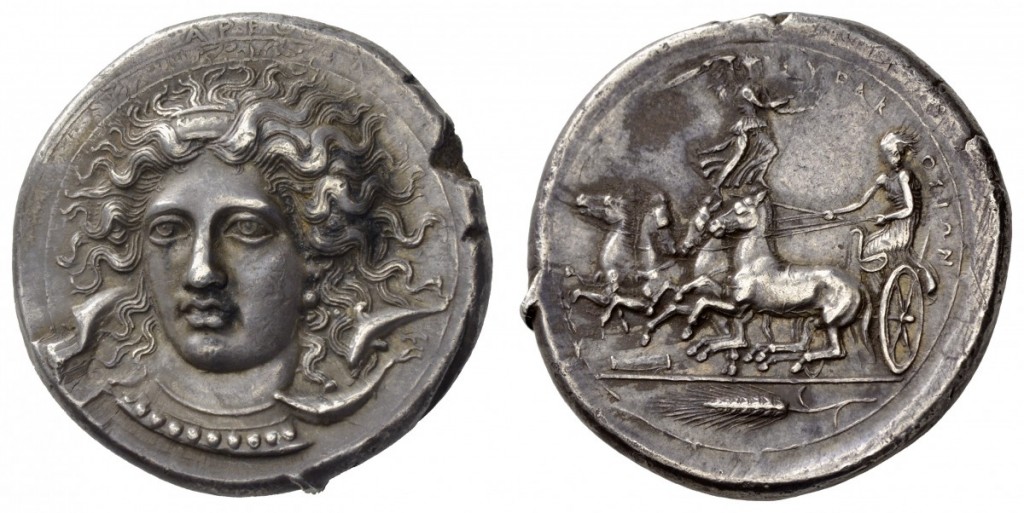 One of the rarities in Greek Coins is about to be auctioned off on May 26, 2014 in Zurich by Numismatica Ars Classica. This is the famous Syracuse Tetradrachm signed by Kimon circa 405-400BC, AR 16.90 grams with the head of Arethusa facing three-quarters perspective. She is wearing a pearl-shaped pendant and necklace over collier ornamented with pearls. Her hair is flowing in loose tresses; across her forehead, ampyx, on which the signature KIMΩN is found (a famous ancient artist).

Around her head we see two dolphins swimming among the locks and a snout of a third emerging from her curls. Above the dotted border, APEΘOΣA. Hidden in her curls is ΣΩ meaning “savior” or “deliverer”, reflecting the political atmosphere of the times.

Extremely rare and undoubtedly the finest specimen known. The greatest masterpiece of Greek numismatic art and work of the most talented master-engraver of the period. The coin was last sold 1999 for 440,000 CHF. Previously, it was purchased before 1960 from the collection of Robert Käppeli.

It is estimated at 1 million Swiss. It is going to be interesting to see what this coin brings insofar as it has rarely changed hands.

« Is NYC Just Insane? No – Greedy.
US Share Market View »