Everyone Trades According to their Base Currency

The problem both analysts and government have is they view the world only through the same looking glass relating everything to the domestic economy in dollars alone. But investors buy and sell internationally according to their own base currency – the one profits are measured and in which they are taxed. You can’t tell the IRS you lost money in Euros, they will look at you and call the NSA. They are only interested in profits or loss based SOLELY in dollars. We warned that gold would decline into 1999 for when you plotted its performance in a basket of currencies, gold was declining internationally whereas in dollars the Goldbugs kept cheering every minor rally as if it would be the start of the great great bull market. In a basket the dollar low was 1982 not 1985. The 1987 high was lower than 1986 because the dollar dropped by 40%. 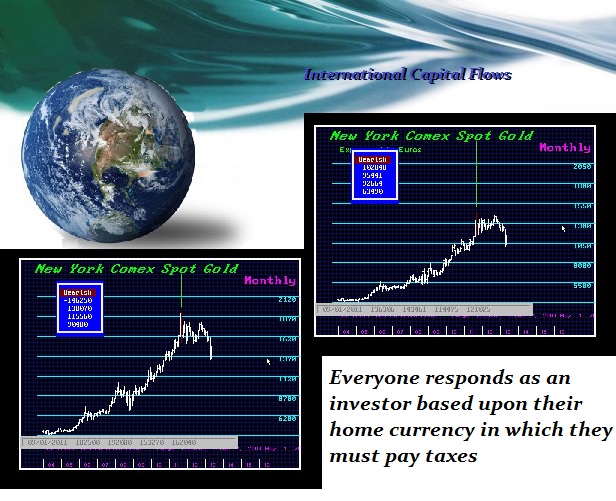 Here is a comparison of Gold in dollars and euros today. In dollars, we elected a Monthly Bearish Reversal and thus we were on our way to new lows. Gold could not even rally when the dollar declined. One of the Golden Rules of Trading, that which will not rally when it is its time to do so, drops sharply when the cycle turns down as well. We warned about a June low. The arguments that have been hurled at us for daring to say gold would decline have been unbelievable. The hatred that poured out in many of them were amazing to the point I betrayed the Goldbugs because i refused to say the same litany they were use to.

I have stated NUMEROUS times that there will be ABSOLUTELY NO HYPERINFLATION and those stories are total NONSENSE to sell precious metals. The decline in gold is NECESSARY to shake the tree the same as it was in Japan where the Japanese carried their long position into the gutter. However, the key here is that interest rates are starting to rise. Bernanke is leaving because he can see what is coming. As the rates rise, then the deficits will rise but government will get even more aggressive than what we have seen to date. I have warned that the ONLY way to see inflation rise REQUIRES interest rates to rise not DECLINE. Low interest rates are DEFLATIONARY, whereas rising interest rates are INFLATIONARY.

So get these corrections correct and you will save a fortune.