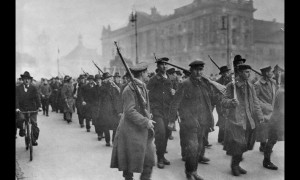 The German Revolution of 1918 that brought to power the Weimar Republic, had actually invited the Russian Communists to come take control of Germany. This is why Germany went into hyperinflation. ALL wealth went into hoarding. There was nothing to be found anywhere. The new government was unable to sell any bonds because who in their right mind would buy them when they wanted Russia to take control of Germany?

Europe is now being destroyed by Merkel. Her election is paramount. Therefore, the entire EU mechanism is geared to support her at the expense of all of Europe.

These politicians always look at things that never see themselves as the problem. So every solution must center around manipulating the people, never reforming government. They speak only of the private sector and carry a very big stick. They cannot see that this “bail-in” leads to the same result as the German Revolution insofar as people, albeit the smart ones, will move their money and start to hoard their wealth keeping only minimum amounts in the bank. This will start the gradual rise in interest rates as more and more capital moves away from PUBLIC investment and shifts toward PRIVATE. This is the dominant trend that has taken place throughout history. Everything has two opposites and we must swing back and forth between the two.

Europeans are now better-off buying assets, especially shares that are at least transportable. Real Estate could be taxed – just look at the USA and Greece where they taxed swimming pools. The smart ones will take delivery of their shares and not even leave them at a brokerage house. The fools will not believe it and are too interested in non-political things so they do not pay attention. That is historically why fools are always separated from their money quickly.

This is why Europe is falling apart again and it is indeed ironic that the very idea of unifying Europe is being transformed into the very instrument that is tearing it apart and may in fact lead to the beginning of World War III.

This is the fate of the Euro. However, it has not been an honest agenda from the start. In my own dealings at the start of the Euro I explained that the Euro would fail unless there was a debt consolidation. I was told then that they did not believe they could get that through a vote so they would keep the issue focused on a single currency and that would become Phase II. They never reached Phase II.

We are preparing a special report with the long-term outlook for the Euro. It is obvious the Euro is rapidly becoming the most dangerous threat to the entire World Economy. The policies are all creating massive threats to world financial stability. Will Europe be the source of yet a Third World War?

We will advise when this will be uploaded for you to download directly from the Swiss site.