The Euro has rebounded but only to retest the Weekly Bearish Reversal. The European Commission fails to understand that they have driven a stake through the heart of the Euro. It will NEVER be a reserve currency without a single debt. This crazy refusal to simply design a normal monetary system will be Europe’s undoing. One could only image what would happen in the USA if all State bonds were reserve quality for banks. How could capital park in the USA? Investors of big money would have to review every State. Banks would be required to be politically correct and buy all State debts or risk being charged with discrimination. You cannot create a single currency withyout a single debt.

The European Commission on Thursday justified its brain-dead policy publicly saying that the “stability of financial markets and the banking system in Cyprus constitutes a matter of overriding public interest”. I do not know ANY client in Europe of “big” money who is think this secures the banks in Europe. This “overriding public interest” is political talk for simply confiscating you wealth.

As always, politicians and bureaucrats NEVER have any long-term plan. All they focus on is solving the immediate event in front of them and the consequences that they create ahead are never even discussed.

Cyprus was a leading financial center. Europe wanted to SCREW the Russians on top of the German Elections so this is both discrimination as well as political.  They have sentence Cyprus to the stone age. Its financial industry will become extinct. NO international investors will trust Cyprus again and are likely to now begin shifting deposits to the United States and elsewhere such as Singapore, China, and BVI. The Russian should move to Asia for anything now in the West is unstable.

The banks in Cyprus reopened, but under severe currency controls. Checks will not be cashed. Withdrawals are limited to €300 per day. Armed guards had to be stationed at banks to keep order and bank managers are being threatened by Russian. They are lucky they are only Russians. If there were Albanian mobs, they would bulldoze the banks, kill the bank managers, their families, and the and dogs. Even Russian are afraid of the Albanians.

The restrictions on the free movement of capital represent a profound breach of an EU principle, showing that the Euro is really DEAD on arrival. Reports from Cyprus tell us that foreign depositors had already withdrawn 18% of their cash from the nation’s banks during February. Politicians fail to grasp that people act in anticipation.

Money in a bank is supposed to be safe and Europe has shown that Marxism is still the underlying doctrine of the EU. Cypriots may be orderly under arm guard, but everyone is really very furious with Europe for they feel Brussels has robbed their accounts at gunpoint no different than had the Russians bulldozed the banks. Cypriots are now starting to question their agreement to switch to the euro. They not only got the short straw, they realize this was foolish for they lost their sovereignty and could not compete with Germany economically anyway.

The European Governments are not really interested in saving Cyprus for they see it as a place to hide money they want. However, in Europe’s greed, they have failed to realize to save themselves at the expense of Cyprus, only means nobody in Europe is now safe. There will be no HYPERINFLATION, they will be DEFLATION aided by confiscation.

Cyprus MUST regain its sovereignty and drop the euro returning to the Cypriot Pound. This will be far less painful than most suspect for Cyprus will then be seen as an alternative to the Euro. It has the potential to be the tail to now wag the EU dog. This could be turned around on Brussels. 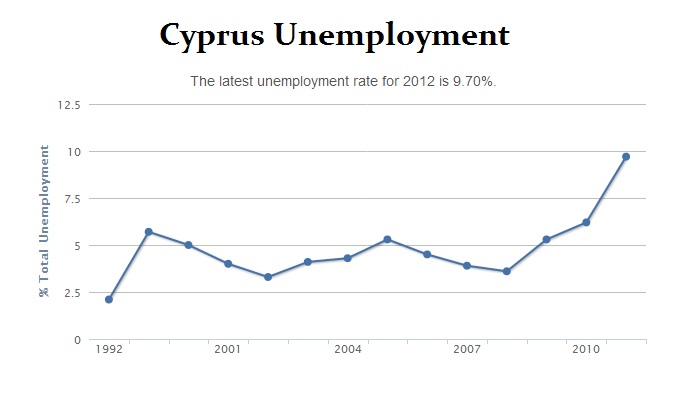 The European Commission has loss all trust internationally. Our emails and phones have lit up. We have had to keep staff working almost 24 hours. They have shaken the world and shown they are by no means trustworthy. Unless Cyprus turns away from the Euro, it will destroy its own economy to accomplish exactly what? Remain in the Euro that is a failed experiment? Its gas reserves can be used to bridge the gap. It is time for major structural reform and Cyprus can be the focal point if it has the guts. As it stands, these controls will last for months. There is no resolution listening to the European Commission. They are destroying the economic of Cyprus and unemployment will rise dramatically.