Reports both from Europe and United States indicate that capital is starting to flee from Southern Europe which prompted the statements by politicians that Cyprus will not become the standard model, which of course it is. The European banks are closed today. Resistance for any knee-jerk reaction will begin at the Monthly Bearish Reversal that was elected 12972 level with weekly system resistance at 13030 level this week. Again, a pause this week will suggest a resumption of the decline into next week, but if they try to support this, then and rally will end by next week and it will be down into May. Europe is clearly now finished. Rumors that in-laws of the President of Cyprus quickly wired out €21 million Euros to London just before the banks were frozen is showing that there are two rules (1) politicians & family, and (2) us. 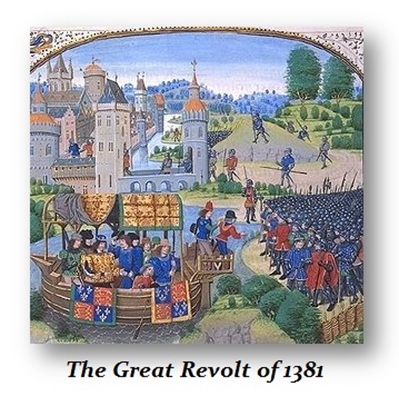 In 1381, the king of England massacred citizens who refused to pay his outrageous taxes. Once he killed someone, he could then confiscate your property and throw your family out on the streets. This is why he began torturing people because once they confessed, all felonies were death and he got your property. People would endure tremendous torture to save their families.

This first uprising against taxation in England was led by Wat Tyler in 1381 that was a bloody affair. This served as a rally cry for another five rebellions until 1405, this tyranny led to another major rebellion led by William (Jack) Cade in 1450. It was Cade’s rebellion that was immortalized by the famous Shakespeare’s play concerning Henry VI (1422-1461; 1470-1471). The memorable line – “the first thing we do is kill all the lawyers”, really meant the king’s prosecutors since you had no right to hire a lawyer in those days. It was the king’s prosecutors who were confiscating farms and property for taxes. Are we headed for a sequel?