What is emerging over elections in Italy is really amazing. We have had the EU claim that the Italian Mafia is controlling elections in June. However, what is now starting to emerge is that the EU Commission played an active role in staging a coup to oust the former Italian Prime Minister Berlusconi and replace with Goldman Sach’s Mario Monti. Is the Mafia stacking the deck for themselves, or are they fighting back against the EU Commission or are they doing nothing and the EU Commission is using them as an excuse to inject its own authoritarianism?

Fabrizio Goria of the Italian news site Linkiesta researched a remarkable story that is not yet making headlines in the major international press. During the fall of 2011, interest rates on Italian government bonds rose to a record highs. The EU Commission then staged a political coup and demanded that the then Italian Prime Minister Silvio Berlusconi must be replaced by the former Goldman Sach’s Mario Monti.

This report of a Brussels coup being organized by the EU Commission is showing the lack of democratic respect that the EU Commission has for the people of Europe that Nigel Farage has been yelling about. By the end of October, the then Italian Interior Minister, Roberto Maroni, was on a phone call with President Jose Manuel Barroso who was the then head of the EU Commission. The call came during a meeting, and Maroni turned pale according to a number of people present in the meeting. Barroso instructed in no uncertain terms:

“I do not want you to take it personally. Neither you nor the other members of the government. But you have to replace Berlusconi. “

Barroso explained that the EU strategy will be that the Italian Prime Minister should be attacked from all sides politically from all European politicians: Everyone would then say that Berlusconi was inappropriate. Then Barroso instructed, Maroni, should rise to power.

Both the German Chancellor Angela Merkel and then French President Nicholas Sarkozy also began in late October telling the press that they questioned the “credibility” of the Italian Prime Minister Berlusconi and his government. Then at the G20 meeting in Cannes, on November 2nd, the day before the start of negotiations, the head of the UK Finance Adair Turner said: “In our view, Italy is in much bigger problems than Greece. A solution should be found quickly.” At Cannes over the next two days, Barroso and EU Council President Herman van Rompuy, announced that Italy by itself is willing to be monitored by the IMF. Finally, on November 9th, Berlusconi resigned. The former Goldman banker Monti then emerged with support from Brussels and suddenly announced a reform program and Mario Draghi made sure that the interest rates for Italy fell once again and the press was called in to twist the coup into a positive event for Italy and the Euro..

There was no real radical reform program that was actually implemented. The ECB pumped in massive amounts of money to fund the Italian banks who were now able to buy Italian government bonds. This now really calls into question the attack upon Berlusconi and the Italian high court upholding his sentence to prison for in tax fraud case. The more interesting aspect of this was the court entered a political ban on Berlusconi from ever again holding office. This is highly interesting for it was B who stated publicly that Italy should leave the Euro in December 2012.

Nothing is ever what it seems on the surface, There are so many power-plays and they always center around curiously using the criminal law to try to alter politics. Ross Perot backed out of the race claiming it was the privacy of his daughter when in fact. I supposed to meet with him that weekend on my way back from Tokyo. The real story – it withdraw or there would be an investigation of his free airport. Lyndon LaRouche was a presidential candidate eight times between 1976 to 2004 who was suddenly sent to prison for tax fraud ending his campaign where he began taking national TV adds. Taxes are always used to imprison anyone who the government does not like for political reasons. Why did the court ban Berlusconi from holding office again. Did they too get a call from the EU Commission?

What is going on Behind the Curtain to retain power over a financial system that is imploding is truly getting out of hand. The Euro was fatally flawed and no amount of political machinations will sustain that power. Europe has once again followed the idea that a strong currency shows a good job done. The price of everything is at least 50% higher in Europe when sold by the same chain in America. The standard of living is declining and the youth have been deprived of a proper education exploited by universities charging a fortune when most people RARELY work in the field that they majored in. As long as you have a degree in something, that is sufficient. It could be basket weaving. It really does not matter outside of the law and medical field. 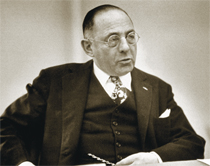 Educators do not want to talk about the famous head of Goldman Sachs who saved the firm after the Great Depression and the New York Times called “Mr. Wall Street”. Sidney James Weinberg (1891–1969) dropped out of school at 13 and began working at the firm as a janitor. Bill Gates dropped out of college, Albert Einstein was also a drop out and Winston Churchill was also a notorious bad student. The people who can create are often called “dreamers” and schools do not like them because they do not conform to mindless memorizing of their propaganda. Most CFOs I have ever met tend to be engineers because they are taught to think out of the box when other fields like economics are taught to conform. Between taxes retarding the growth of small business to create future jobs robbing society to pay the pensions of state workers, and the education system burdening down the youth with debt because of excessive costs for questionable education that fails to prepared them for the real world, the future appears very bleak indeed.

All government can do is oppress the people more to sustain their crumbling power. The global financial system is a patch-work, never designed by any rational people tested by the trials of time and circumstance, and it is now unraveling as they turn to authoritarianism out of their self-interest – not those of the people. The system is collapsing. The question is what will be left standing when the dust settles. We need major reform that stands up to the test of time and circumstance with proof from history that we are on the right course for the future.