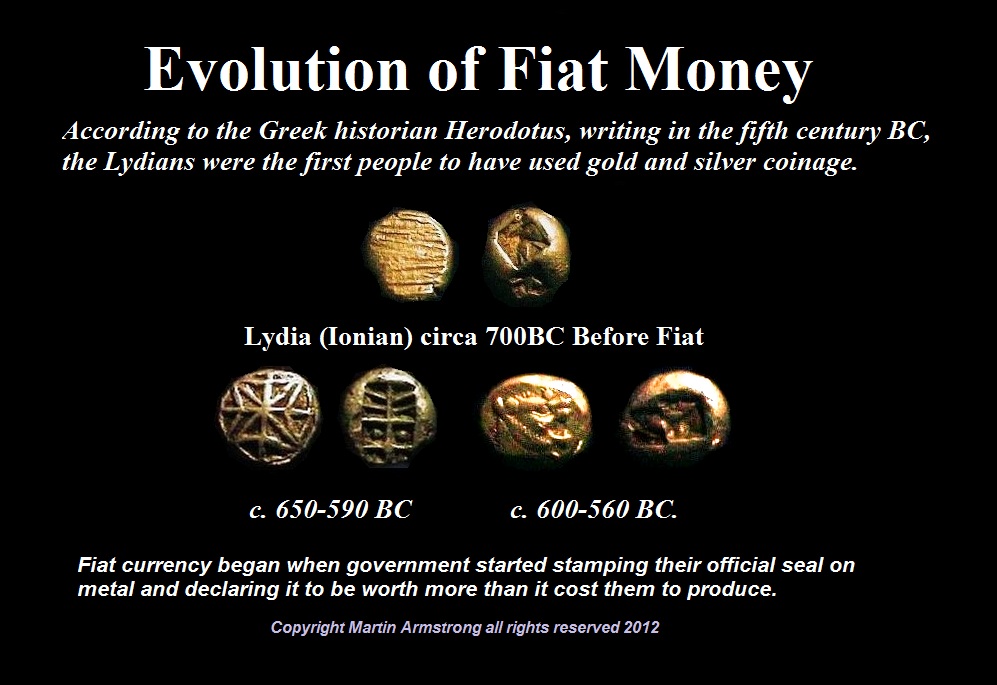 There are so called “Goldbugs” who hate my guts because I disagree with their reasoning why gold will rise and they cannot stand anyone who is a real analyst and ever forecasts that there will be a pause in the trend, I remain deeply concerned that many of these people who hate me so much are really nothing but shills for the bankers who do everything they can to put out misinformation about me. They talk up the Gold Standard and spew out the nonsense about fiat money when all money has been fiat since government started stamping an image on metal and declaring its value to be more than what it cost them to produce it. They cannot explain why did gold go down for 19 years between 1980 and 1999 when that fundamental was still present. If I owned sovereign debt, I would be talking up this nonsense to make people believe a gold standard is the answer and then quickly cash in the bonds and take the gold. We had a gold standard – Bretton Woods. They still printed more money than there was gold to back it and that is why Nixon was forced to close the gold window in 1971. Neither reasoning can be proven to be real – but it fools a lot of people a lot of the time. Gold is simply a tangible asset that is the alternative to cash the same as real estate, stocks, and collectibles. It is movable, which is a plus over real estate, it is liquid for it is the same quality sold around the world unlike oil or wheat, and it cannot be cancelled as is the cash with cash.

Anyone who thinks there will be a willing return to the gold standard just does not understand government. Why give up power as long as you have it? The real trend is toward the elimination of cash and thus government will then be able to collect every penny it desires in taxes. The object is a cashless society. Gold is not the hedge against “inflation” it is the cornerstone of wealth. The common denominator in the “real world” free of political manipulation. This is why governments are now clamping down on the cash gold trade. We are headed into the end of cash and that means the end of anonymity. Government will keep tabs on everything you do. They decide to spend whatever, then they demand you fund it. They have destroyed international trade. An American small businessman can no longer build a company overseas for no bank will deal with an American. And we are trying to create job? The economy is starting to spiral down as the thirst for taxes destroys everything – include cash.