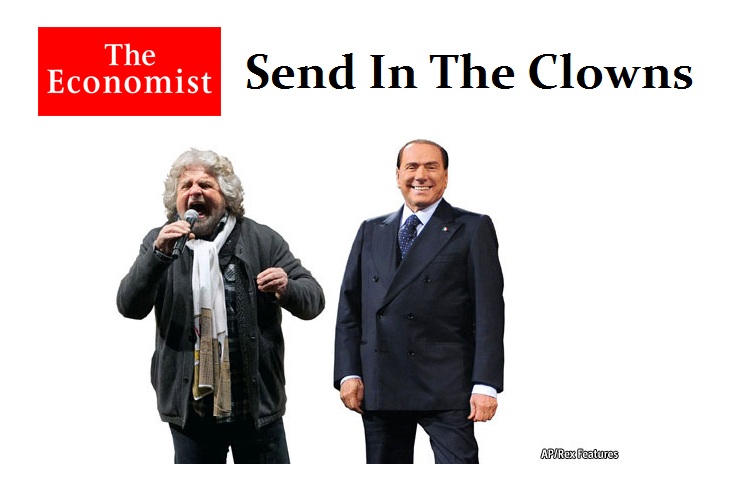 Did Italy fail to see reality from the bondholder’s perspective, or the real reality from the long-term viability perspective? The latest article from the Economist says Italy is jeopardizing Europe and the Euro. Perhaps it is about time since the politicians spend without remorse and then the people are expected to sacrifice their entire future for the bondholders. The opening line of the Economist was:

“A SENSE of humour in adversity can be attractive, but it is not always useful. Confronted by the worst recession in their country since the 1930s and the possible implosion of Europe’s single currency, the people of Italy have decided to avoid reality. In this week’s election a quarter of the electorate—a post-war record—did not even bother to show up. Of those who did, almost 30% endorsed Silvio Berlusconi, whose ruinous policies as a clownish prime minister are a main cause of Italy’s economic woes. And a further 25% voted for the Five Star Movement, which is led by a genuine comedian, Beppe Grillo. By contrast, Mario Monti, the reform-minded technocrat who has led Italy for the past 15 months and restored much of its battered credibility, got a measly 10%”

If you ask most people what was the first central bank, they will no doubt point to the Bank of England founded in 1694. However, the use of banks for the purpose of the government post-Dark Age truly begins with the Wisselbank founded in 1609 in Amsterdam. While one paid a fee to have an account at the bank and there was to be no lending of money, what emerged behind the curtain was in fact the Wisselbank lent money undisclosed to both the government in the City of Amsterdam as well as to the government sponsored Dutch East India Company. This became public in 1790 causing a real panic that forced the bank to be taken over by the City of Amsterdam in 1791. Eventually, the bank was forced to close by 1819. Here we have what the Dutch paid for to have a safe place to keep your money. There was no moneylending – except government could NEVER keep their finger out of everyone else’s pockets.

History stands as witness that it should be AGAINST the law for politicians to ever BORROW. This is the way ALL governments perish. It is the triumph of hope over experience. It is like the person who gets married after the 10th divorce. When will we ever learn – (1) term limits to restore real representation, and (2) no borrowing. Anyone who buys government debt deserves to lose everything. They are the ultimate fools. You do not even get a penny on the dollar when government goes broke. Even clients at M.F. Global got something back.

Italians have got it right. This is insane. DEFAULT and get it over with. It is inevitable anyway. NOBODY ever pays. Can anyone explain why governments borrow more every year and have no intent of paying anything back? This is the greatest transfer of wealth from the working class to the bondholders ever to take place in history. The money is not going to the poor to make life better. It is robbing the productive class that creates employment and transfers the wealth to bondholders. Almost 70% of outstanding national debts are accumulative interest payments. That is reality! You have to be completely in denial to think you can raise taxes and keep this game going. This is pure insanity. So sorry, Economist, perhaps the Italian’s got it right. This is just one giant comedy and the joke is on us. As Frank Sinatra ended that song – Send in the Clowns, Don’t bother! They’re here!